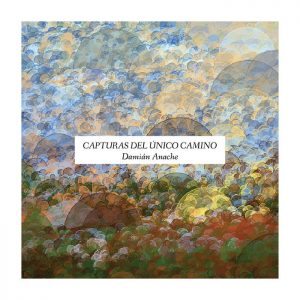 Argentine composer Damián Anache sets the way for this first solo album endeavour Capturas del Único Camino. The new album features Anache completely immersing himself into experimental ambient music, utilising every trick and technique at his disposal to create and present a challenging and driving album experience. The real driving power of Capturas del Único Camino is in how Anache created the music initially, which involved various source material (including acoustic instruments , vocal recordings and field recordings) all being run through an algorithm created by Anache himself. The result is a slowly moving, meditative piece that hardly evolves as it progresses but instead lulls one into a mysteriously captivating world.

Capturas del Único Camino comes across as a very intelligent and driving album experience, one in which the techniques in how the music itself has been composed is every bit as relevant as the music itself. The algorithm made by Anache results in the creation of music that moves at glacial paces, slowly moving in and out of focus, constantly interpreting sounds and data until the music is created within. The album itself is more than just its experimental notions, as the result of the ideas and techniques is an engrossing experience that slowly engulfs the listener.

There are many merits to Capturas del Único Camino, which sees Anache completely embracing experimental music with great confidence, utilising his many talents to create something where the experimental elements don’t overtake the accessibility of the music itself. Although there’s many enjoyable elements to the album, its rather sparse sound, combined with a fairly challenging nature overall, might perhaps turn away those expecting something more on the ambient or classical end of things than the experimental side.

Anache’s first solo effort comes across as a difficult piece to swallow at times, though its experimental notions give it great gravitas, pushed further by the actual result of the experimental notions themselves, which create an interesting album experience. The experimental ideas being used by Anache may come across as a gimmick to some but Anache has managed to push out an incredibly impressive album, somewhat reminiscent of William Basinski’s Disintegration Loops, both in terms of the tone of the music itself and the methods used to create it. It’s a strong album, and one that showcases Anache’s talents in a great light.