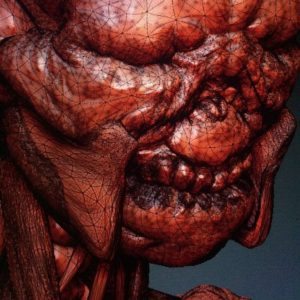 The most terrifying aspect of Ridley Scott’s 1979 sci-fi thriller Alien is that the titular creature is rarely ever seen. It lurks in the film’s periphery, and yet its presence pervades every frame. KoMaRa’s eponymous debut has its own H. R. Giger-esque alien in its artwork, designed by Tool guitarist and artist Adam Jones. In a similar fashion to Scott’s Alien, the music of KoRaMa provides us with hints of its own creature’s intent, its physicality, but never fully reveals it.

The band name comes from abbreviations of the surnames of the band members: David Kollar (guitar), Pat Mastelotto (drums) and Paolo Raineri (trumpet). This unconventional (for rock) trio play music perhaps best labelled as avant-garde and experimental rock, as vague and hard to describe as that term may be.

This intangibility – the “peripheral” aspect of the alien, as it were – is explored through music that is heavily manipulated. KoMaRa’s opening track ‘Dirty Smelly’ introduces us to guitars, bass, keys and trumpet all distorted and fuzzy as if being played through a crackling walkie talkie. All instruments get their moment of aural clarity later on the album, but only ever fleetingly with the exception of Mastellotto’s drumming – for the most part clear and forceful – and occasional sections of Raineri’s soulful trumpet playing. Everything else though is amorphous, hinting at this unknowable and unyielding alien landscape.

Some pieces, like the opening track, reveal a debt to King Crimson (in particular, the latter day era of which Mastelotto is still a part of), but the music breaks off into new territory very quickly. ‘She Sat In Black Silt’ has Raineri’s trumpet provide a yearning, human element against its cold electronic surroundings, evoking a sound that is part soundtrack and part electronic noir jazz. This latter noir aspect is developed further in ‘God Has Left This Place’, opening as it does with its detective-like narration.

In a more traditional vein, ‘Pasquinabe’ and ‘Afterbirth’ attain a state of transcendence by having a relatively simple groove evolve over the piece. By the end, in both cases we have Raineri letting loose over Mastelotto and Kollar’s metal riffage – not exactly the normal place you expect to hear a trumpet solo, but to KoMaRa’s credit they make it work.

In spite of the earlier comparison to Alien, this music is not terrifying. It is mysterious, foreboding and eerily beautiful, hinting at and attempting to describe something just beyond the mind’s comprehension. A beautiful, impenetrable Cthulhu. KoMaRa pushes forward into the unknown, acting quite literally avant-garde, and does so with an energy that makes you want to start the album again as soon as it finishes.