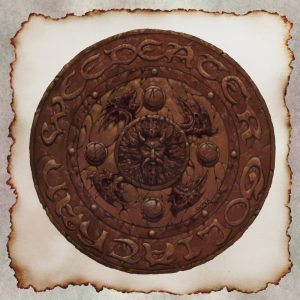 Weedeater remains a standout in the stoner/sludge world. Dave “Shep” Shepherd’s guitar tone and Dave “Dixie” Collins raspy screams are instantly recognizable. The band’s humor and gritty demeanor always make for a fun listen and a raucous live show. Weedeater returned last month with their fifth full-length album Goliathan. If you love Weedeater, you’ll love this new one. While it’s not their best work, it is ten new tracks of fuzzed out stoner heaviness that continue in the same vein fans have come to love.

Goliathan plays like you’re hanging out with the guys in a backwoods shack, having a drink and a smoke in between crushing songs. The opening track ‘Processional’ begins with the sounds of a drink being poured, and ‘Battered & Fried’ tops us off half way through the record. Both of these songs remind of skits on a hip-hop album; they are there to pad the album and offer a glimpse into…something else. On Goliathan they feel forced. They are supposed to be fun, but they leave you wanting more music and less of these in-between moments.

The stoner songs on the rest of the album are solid. ‘Cain Enabler’ is slow and riffy, and makes me want to light a joint and melt into my couch. ‘Claw of the Sloth’ hits hard and heavy. ‘Bully’ pulls out the toilet humor as Dixie Collins hollers “Make you drink me pee pee. I see your little wee wee”.  ‘Joseph (All Talk)’ and ‘Reprise’ feel like home to Weedeater fans that remember the first time we heard …And Justice for Y’all. But then the album ends on another interlude moment with Dixie Collins noodling on the bass for 3 minutes. This brings back the feeling of sitting in a dingy living room with the band while they play; it also feels like they phoned it in.

When Goliathan is on, it’s on. The interim tracks feel forced; the rest of the songs hit all the right spots. Weedeater isn’t breaking new ground here. They are doing what they do and having fun every step of the way. It’s not perfect, but Goliathan feels like the band’s most personal work to date.