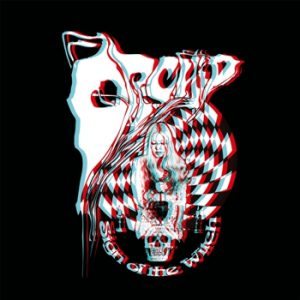 Orchid have certainly been making waves since they released their debut album in 2013. Tours of Europe, hitting the German charts at #18 (with the second album), critical acclaim for their releases and being twice invited to play at Kirk von Hammett’s Fear FestEvil (a horror convention created and curated by Metallica’s Kirk Hammett). With this, their latest EP, Sign Of The Witch, things continue to look bright for the band.

EP opener ‘Helicopters’ begins with a crash, which quickly settles into a groove from bassist Keith Nickel that’s punctuated by guitar slices from Mark Thomas Baker. Its ominous (“As another land is burning…”) set has an infectious atmosphere to it. Lyrically seemingly to draw from the same well as Sabbath’s ‘War Pigs’, it builds to a climax that caps a exhilarating musical journey through a mere 4 minutes, surprising as it packs so much in such a short space.

‘John The Tiger’ (apart from having the best title on the EP…. not that I’m biased or anything) features a riff so bouncy that it was difficult to type this review whilst listening to it. It’s here that the band really demonstrate the growth they have made. It’s more of a straight ahead rock song, whilst still remaining in the vintage rock sound they are so good at, structurally it’s more adventurous, featuring a nice change of pace for the guitar solo, it never stops driving forward, pulling you along with it.

Title track ‘Sign Of The Witch’ follows in a similar vein, its forward momentum authored by drummer Carter Kennedy as he rumbles across his toms and cymbals, exhorting the band and the listeners to keep up the energy. A particularly impressive vocal performance from Theo Mindell is completely in sync with this atmosphere, swooping and soaring the song is the standout track on the EP and you can see why they named the EP after it.

And so to EP closer ‘Strange Winds’, a languid, atmospheric slide towards bliss. Conceptually like Floyd’s ‘Set The Controls…’ having a conversation with The Doors’ ‘The End’, this is a wonderfully mesmeric way to close the EP. Shimmering guitars, an FX treated vocal line, rumbling bass and drums and percussion that is insistent but never overpowering combine with perfect unison. I’ll be honest, I’d have happily embraced this track if it was 15 minutes long. It has that vibe to it as well as the space to do so. If the band are reading this: this is your extended jam song in concert!

This is an excellent stop-gap for Orchid fans until the next record appears. It has all the things you love about the band as well as through a new spin on things. If album number 3 takes its cues from this EP, we’re all in for yet another excellent collection of tunes. This may be tagged “vintage rock”, but make no mistake, this is vital, fresh and relevant music. Flares are simply optional…..