Journalists: a word to the wise. If you’re going to conduct interviews at a festival, and if you’re going to suggest the bands come to your tent instead of meeting them inside the dedicated backstage press area, it’s worth ensuring before they arrive that you have more than three and a half chairs on offer, particularly if one of them is occupied by the most hungover/still drunk person at the festival, who doesn’t want to move and, more importantly, doesn’t want to shut up. 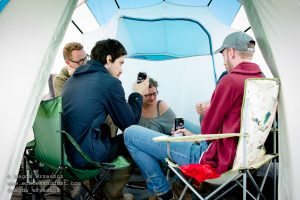 Having settled half of Maybeshewill and three-fifths of Waking Aida inside the porch of one of the larger tents at our camp, we got down to business. Business, primarily, being us stumbling through some ill-thought-out questions and the band members graciously going above and beyond in the answers they provided. (Another word to the wise – if you really are going to conduct interviews at festivals, don’t drink the bar’s entire stock of 6% cider the previous night).

Waking Aida have a new album on the cards – Full Heal – which has been produced by Jamie from Maybeshewill and is coming out on Robot Needs Home Recordings on 25th September (four days earlier than intended, due to the new international release day). We have a bit of a discussion about the international release day and what it actually means for bands at this level, and attempted to talk them into releasing 36 hours later to see if someone arrives at their door with a clipboard and a frown. I don’t think we succeeded.

So, what’s the album like? “If you liked the first album, you’ll probably like this album”, says Josh. “I find it very hard to talk about my own music”, he continues, aware that this isn’t the most forthcoming of responses.  James interjects “We’re not just talking more of the same. We’ve developed since the first album – we’ve matured.” There is some discussion as to whether their maturation was more like cheese or wine (the overwhelming consensus being cheese). “I feel people pegged the last record as fairly Summery, whereas this is more of an all-weather album.”

Waking Aida will be touring in October in support of the new album. They can’t tell us who with just yet, but do say it’s a band they love and are really excited to be touring with. Catch them at one of the following shows:

The talk turns to the wonderful surroundings we find ourselves in (albeit slightly less wonderful after the Thursday Night Gale – the Bixler field felt somewhat apocalyptic on the Friday morning, and John said there wasn’t a single gazebo left standing in the artist field). 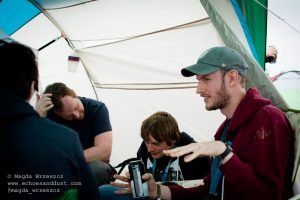 Waking Aida played ArcTanGent last year, and loved it. “It was loads of fun. It was a really lovely, beautiful day, and the PX3 was really full.” said James M. “It’s really nice to be playing something other than a show in Huddersfield to two people”, says James C, “to have a captive audience of people you know have an interest in this type of music”. Both bands clearly harbour a lot of love for the festival. “There’s always so much pressure to make the most of it” says Josh, “it’s such a weird opportunity to have; everyone’s clash-finder is crumpled and mussed, everyone’s frantically trying to decide what to see”. “I think ArcTanGent is probably the best thing that’s happened to this kind of music for a while.” James M concludes, which isn’t something we can really disagree with.

“I have mixed feelings about how big I want it to get.” he continues “I mean, I want the people running the festival to succeed but there’s always a part of you that wants to keep it to yourself.” “I wouldn’t worry,” John interjects, and everyone laughs.

This will be Maybeshewill’s fourth ArcTanGent appearance in three years (they played twice in the first year, performing a crowd-picked set on the Thursday night). “They’ve been very good to us,” says John. “2000 Trees was one of the first festivals we played. The point at which we played it for the first time kind of coincided with us doing a band ‘properly’, I guess, and over the years we’ve got to know them and we’ve grown up as a band and they’ve grown up as a festival at the same time, and it’s been really nice to be asked back so many times.”

They nearly didn’t appear on the line-up at all this year. “The offer came in late and we thought ‘well, that’s really nice’ but we felt it wouldn’t really be right to do the same thing again,” says Jamie, “so we decided to do something a bit different this year and use the strings and brass. Otherwise I don’t think we would have played. We really respect the festival and we want there to be a reason for someone to come and see us for what might be the fourth time.”

“If you’re up against another amazing band, which you inevitably are at this festival”, continues John, “you don’t want people to say ‘oh well I saw Maybeshewill last year’. At the end of the day it IS a competition and we DO want to win.” He jests, but there is something in this – something Josh tapped into when talking about wanting to make the most of the opportunity. I have yet to see a set at ArcTanGent where the band didn’t bring their A-Game to the table. Putting all these wonderful bands in a field full of people who love the music they make encourages them to do better, to be better. It’s a truly incredible thing to watch. 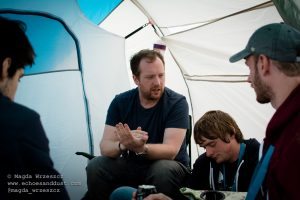 As John and Jamie talk more about their upcoming performance, it becomes clear that they are somewhat anxious about how it’s going to turn out. “There will be 10 of us on stage, and we haven’t been able to have a single practise with everyone there,” John admits, “we’ve had two full-scale practises with one person missing from each one, and Jamie’s been rehearsing in the van with all the strings. Fortunately, they’re all exceptionally competent musicians.” And there it is again – a statement of fact, but another acknowledgement of the scale of talent on display at this festival.

We ask if reworking the tracks for new instruments has given them a new or different appreciation for their music, and Jamie laughs. “Pretty much the opposite actually! With the orchestration, we bit off more than we could chew really, as we had to score it all out”, he continues, “which took a lot longer than we thought.  If it goes well, it’ll surprise me”. We can only assume that he was gobsmacked by the end of their set, which was passionate, flawless and absolutely spectacular. Joined by two violins, a ‘cello, and a brass section, their tracks soared to the very top of the Arc Stage, dipping and whirling with a fervent intensity, dragging thousands of people along for the ride. As they left the stage, the audience howled for more. Eventually, they obliged. “You do realise an encore at a festival is a terrible faux pas?” asked John. He was smiling as he said it. 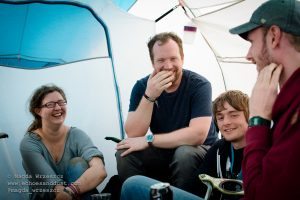 Watching members of Waking Aida and Maybeshewill together, listening to them talk to each other, it’s clear that in addition to being fellow musicians they’re very good friends. There is a very comfortable atmosphere between them; they move seamlessly between gentle joshing, questioning each other, sharing in-jokes and having intense conversations – the type of relationship you often see within members of the same band, but to find two bands who can share that across all members of both bands is somewhat of a rarity, and always a pleasure to see.

One of these intense conversations began while talking about the festival. “It would be nice if we could get more women interested in this type of music”, says James M, drawing approving nods from everyone. “I’ve only seen about 5 girls this whole festival,” James C continues. The conversation turns to the poster made by Crack in the Road, where they took the Reading and Leeds festival line-up and modified it to show only artists with female members. Needless to say, there weren’t many left. “I saw that article and I was like ‘oh this is awful, this is a terrible thing'” says John, but then I looked at the Handmade line-up and it was even worse. I felt terrible.”

I say I think the audience at gigs within this scene is almost at parity, although upon later reflection I wonder if that might just be in the heady metropolis of London. John rightly points out that the audience at this year’s ATG is definitely male-dominated, and the line-up even worse – it certainly does seem that there are far fewer women in the bands of this scene than there are in some other genres. We muse as to why that might be. “I think it’s very nerdy music, and men are just more nerdy”, says Jamie. As a lifelong nerd who was relentlessly bullied for so being, I take issue at this before I realise my own explanation – the comparative heaviness of the bill compared to last year – falls foul of exactly the same problem; any assumption about what “women” as a homogeneous mass do or do not want from music is only going to have a negative impact on gender parity in the scene as a whole.

It is difficult, talking to 5 men about why there aren’t more women in the scene. While it is clearly something they are genuinely concerned about, their points and answers, even some of their questions, seem a little naive. For an all-male band who is about to go on tour, the answer to the question of “why aren’t there more women” should be “well, are you going to tour with any?” For a member of an all-male band who also books bands for a festival, it should be “well, have you booked any?”. But those are simple answers to complex questions, and while it’s easy to say that change begins at home, I would be being naive in the extreme if I didn’t think we needed large, sweeping, top-down changes before women will truly be seen as equal in the music industry.

Later that evening, a guy starts hitting on my (younger) (married) sister, and, after seeing my displeasure, wraps his arm around my waist and tells me his name is Shaun. When I ask him to take his hands off me, he wraps his arm around my waist again and tells me that he’s “not a bad guy”. I have to ask him multiple times to stop touching me, and he looks hurt and baffled at my response. At another point during the weekend, a man refers to the female head of a successful international record label as “sweetheart”. My mind goes back to the conversation, and another answer crystallises in my mind – another simple answer, but one that seems to cut through a lot of the complexities. It is this: we need to be actively encouraging women to involve themselves in the scene, and we do that by treating them with respect. Seeing all-male bands having serious discussions about how to address the gender imbalance within the scene is a heartening sight, and definitely a step in the right direction.