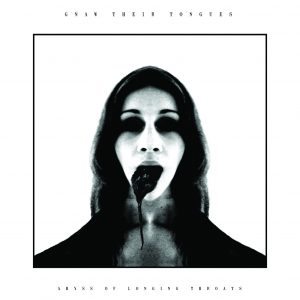 Gnaw Their Tongues has released, or been involved with, 37 records since 2006. Most are EPs and splits, and now the one-man band that is the brainchild of Mories is back with his eighth full-length release Abyss of Longing Throats. The experimental noise/black metal act is dark and evil. Like Portal and Ævangelist, Gnaw Their Tongues truly creates the soundtrack to your nightmares.

Abyss of Longing Throats follows in the footsteps of the band’s previous records. The first track ‘Lick the Poison From the Cave Walls’ sets the mood for the whole record, bathing you in noise and horror. ‘Through Flesh’ continues in the same vein. The title track ‘Abyss of Longing Throats’ turns up the black metal elements, with near constant blast beats and howling vocals. The drums are set back in the mix, while the guitars whine and hum up front. The next track ‘From the Black Mouth of Spite’ has an industrial flavor, mixing in metallic clanging and ambient sounds like hissing steam pipes. The rest of the album continues in this vein; black and death metal with industrial influence, and the uncomfortable feeling of being in a twisted torture fun palace. ‘The Holy Body’ and the title track are stand outs, showcasing the diversity and sickness from which Mories writes.

‘Abyss of Longing Threats’ is not a pleasant album to listen to. Gnaw Their Tongues turns pure fear and hatred into music. This isn’t the record you’ll want for a party, and it can’t be used to set any kind of mood. This is one you’ll want to play by yourself in a pitch black room with your headphones on. It makes your skin crawl. If you’re a fan of the band’s previous albums, and of this genre of auditory savagery, you’ll love this new one as well.