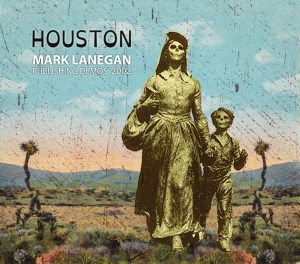 Released on August 21, 2015 via Ipecac Recordings

When an artist’s career is still going, and especially when that artist is enjoying a period of creativity and originality that shows little sign of slowing, it’s slightly curious to see so much retrospection currently being applied to the work of Mark Lanegan. There is rarely a gap large enough in his current schedule to fit much in the way of a look back when so much to digest now and to look forward to.

This of course is not to say that such distractions are not welcome as the recent 3xLP anthology so wonderfully illustrated, and indeed a boxset of his Sub Pop days is also mooted for release sometime in the not too distant future. Sandwiched in between those collections of largely familiar work comes this interesting nugget of more obscure work from a somewhat transitory time in Lanegan’s solo career.

Recorded over seven days in April 2002, Houston is, as it says on the cover, a collection of publishing demos, some of which made it onto the soundtrack to the Cook County movie, some which evolved into other things by various degrees, and others that simply are just there. Coming as it does between the releases Field Songs (the last of his more traditionally blues/folk records) and the heavy, eclectic Bubblegum, it’s a fascinating document from the very start as the benefit of hindsight here puts Mark in the spotlight as an artist well and truly in transition.

There’s a continuation and expansion of what preceded this session, and there’s no doubt that a lot of people would be more than happy if this collection had been completed and polished and put out as the follow-up to Field Songs, particularly with gently beautiful songs such as ‘High Life’ that follow in that vein and with others such as ‘Nothing Much To Mention’, but of equal interest is the foreshadowing of his imminent journey into the leftfield and the way that certain things get squirrelled away for future use.

Familiar to fans already is ‘Grey Goes Black’ which appears on the Has God Seen My Shadow? Anthology (along with the bright ‘Halcyon Daze’), the title of which was retained for future use a full decade later. ‘Two Horses’’ guitar part will be instantly recognisable from both ‘Mirrored’ (a Bubblegum b-side and still a live favourite) and ‘Deep Black Vanishing Train’ (from Blues Funeral) and is all the more welcome for it. The most obvious and interesting point of reference come with ‘When It’s In You’ (Methamphetamine Blues), the chorus of which is the strongest indication of a mind well at work towards what was to follow.

For all the looking for comparisons, milestones and archaeological nuggets, there’s much to be enjoyed from the songs that appear nowhere else in Lanegan’s published history to date. ‘The Pilgrims’ is an intriguing mix of dark blues vocal, swinging percussion and post-punk guitar, ‘I’ll Go Where You Send Me’’s alt-Americana wouldn’t feel out of place on a David Lynch record and ‘Blind’ is a fine example of slow-paced psychedelic heaviness that fits in neither period of his canon but provides a neat keystone to keep the whole thing as neatly balanced as it can be. It all finishes with the strangest duo of songs; ‘A Suite For Dying Love’’s coda is as joyously uplifting as anything that he’s ever been involved in, while closer ‘Way To Tomorrow’ (featuring a truly mighty vocal performance) is as bleak and despondent as you could hope for from his Dark Mark persona.

Over the twelve tracks here, there is certainly a feeling of slight unfinishedness about them where several tracks hit an impressive groove and then come to a close rather than a fully-fleshed ending, although it has to be said that the sound quality and performance from the artist and his band here is exemplary throughout. These are very large and detailed sketches however, so it’s difficult to see the main audience for this record being disappointed in any way, shape or form with what’s here.

Ultimately, Houston is a very welcome curio for fans, and something well put-together enough to appeal to most passing listeners. Not really a “lost album” so much as a single week that fell by the wayside and that happened to have been put to tape, it’s a record that doesn’t quite fit anywhere due to its own short-lived transitional nature, and it’s this sketched uniqueness that provides its main draw and illustrates further the depth of songwriting imagination that Mark Lanegan possesses.