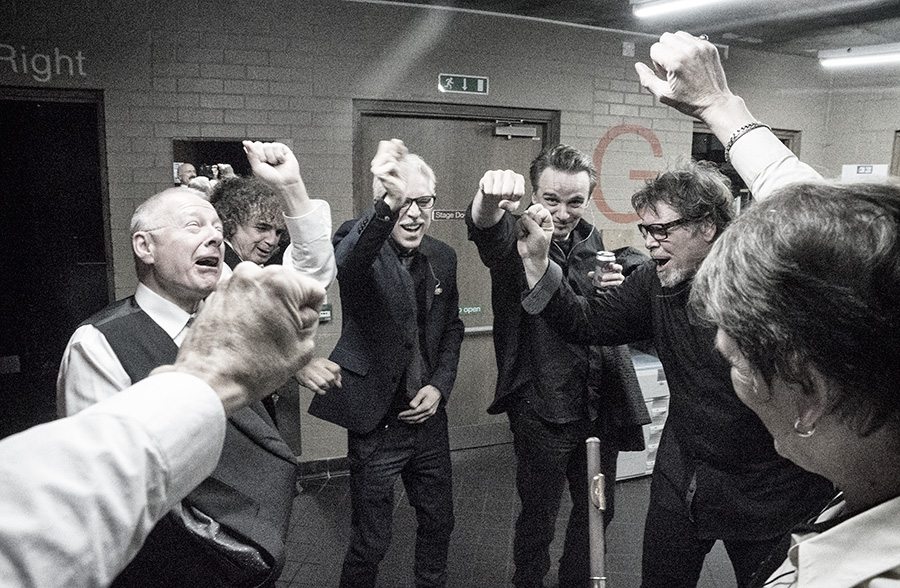 Although I had never been to a Crimson gig, I already knew Fripp’s stance on photography, i.e. that he “sweetly requests” that there should be none of it. So I’ll be a little more descriptive than usual in terms of the stage set-up, and all the photos featured here are taken by bassist Tony Levin before and after the show.

I would never get to see King Crimson. Being from Australia, I lived too far away, and the band hadn’t released a new studio album since 2003’s The Power to Believe. Mind you, I had certainly come as close as possible, having interviewed Tony Levin on several occasions and having seen The Crimson ProjeKCt live (a side project made up of many Crimson alumni). But there was something special about those lineups that were allowed the official title of “King Crimson”; something beyond a mere symbolic importance arbitrarily forced upon them. So when guitarist and only original member Robert Fripp announced that “The Seven-Headed Beast of Crim is in Go! mode” while I was organising my move to London, I bought a ticket without questioning it (ignoring the violent screams coming from my wallet).

The comparison to a beast is apt. It’s what distinguishes the name of King Crimson from the side projects. The Crimson ProjeKCt is a great way to rock out and listen to some fantastic musicians, but King Crimson is a much more serious and intense affair. This music will eat you alive – it is dark, intense and carefully constructed. A lumbering monster that cannot stop once it has gained momentum. 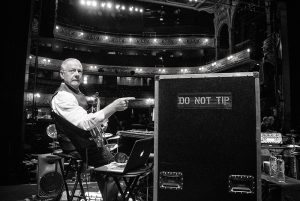 From the moment I stepped into the Hackney Empire, it was clear what would propel this band forward. This lineup of Crimson inverts the typical band structure and finds the three drummers Pat Mastelotto, Bill Rieflin and Gavin Harrison at the forefront, with the rest of the band playing behind them as the backline. The three drum kits dominate the front of the stage, each bass drum featuring the face of a cyclops – another confirmation of the band’s beastly status. Mastelotto and Harrison have typically progged-out drumkits with a plethora of cymbals and toms. Rieflin opts for a more stripped down approach, keeping his kit to the bare essentials. As he also plays keyboards quite a lot in this show during the mellotron-dependent older material, this makes sense. Behind them on a raised platform are, from left to right, Mel Collins on flute, clarinet and a variety of saxophones, Tony Levin on his Chapman Stick, electric bass and NS upright bass, Jakko Jakszyk on vocals, guitar and flute, and Robert Fripp decked out in headphones and guitar in the far right corner.

From the start, this was always going to be a very different show for the band. King Crimson infamously rarely delve into their back catalogue more than a few albums, and would usually stick to work created by the current lineup. So it was an amazing moment for the show to start by the polite tuning up and count in “one, two, three, two, two, three” that ends the song “Islands” playing over the speakers, and then for the band to kick in with the percussion intro of “Larks’ Tongues in Aspic, Part One”.

Nearly every piece played was a highlight of one lineup or another, so much so that it is tempting just to gush over the setlist track by track. With Adrian Belew absent from this lineup, a lot of the material from his reign was left aside in order to delve back into far older pieces. Having said that, there were a few nods to his lengthy stint, with “The ConstruKction of Light” and the final piece of the Larks’ Tongues puzzle, “Level Five”. So there was no “Elephant Talk” or “Three of a Perfect Pair” here, instead this lineup was used as a way to explore pieces from In The Court of The Crimson King, In The Wake of Poseidon, Red, and the criminally underplayed Islands.

Sly chuckles of approval and grins were exchanged between members of the crowd when a more obscure track was played, and one man stood and danced in what I can only assume was an ecstasy-fueled dream state during “Epitaph”. Gasps broke out from the crowd during their classic material, inevitably followed by a respectful silence. I was the only one nearby to have that response during the aforementioned later-era “Level Five” – I’m not sure whether that can be attributed to the generally older demographic of the audience, or just that my obsession with the band lead me to go far beyond their key albums.

As one can imagine, with three drummers this music is rhythmically heavy, and the focus is certainly on the polyrhythmic interplay between Mastelotto, Rieflin and Harrison. Throughout the night we were treated to drum-only pieces where each member got to show off their chops. In these moments, Rieflin was overshadowed by Mastelotto’s sheer intensity and Harrison’s dexterity, and his stripped down kit made for less variation in fills. While not ideal during a drum trio, during the band pieces Rieflin provided a solid backbeat (or should that be frontbeat?) for the rest of the band, allowing all others to work around and play with the stability he gave them.

And then there’s Robert Fripp. Fripp is undoubtedly the greatest musical influence in my life, and his compositions have shaped how I play and listen to music. To finally hear the master of dissonance and odd-timed beauty in reality was a spectacular moment, and his meticulous dedication to his craft was on display from the moment he stepped onto the stage and rubbed some sort of fret dressing onto his guitar. There was a moment during one of the many highlights of the night – Islands’ “Sailor’s Tale” – where he coaxed out an album-perfect clanging noise (there really is no other way to describe it) from his guitar that elicited a cheer from many in the crowd. Throughout the show we were privy to both that chordal-style of soloing and the never-ending sustain that typifies Fripp’s playing, and it was an honour to finally be able to hear it in person.

Alongside the drum-only pieces there was also some new band material, the highlight being a piece called “Meltdown”. It seemed to perfectly meld the old and new aspects of Crimson into one whole, with Jakszyk entangling his guitar with Fripp’s in a way I thought only Belew could, and Collins’ horns reminding us of an earlier Crim.

The band really made these pieces their own, and no matter the song it was a genuinely tough decision to pick which member you chose to focus on. Having said that, Mel Collins had to be one of the highlights of the night. Collins played with Crimson on-and-off again throughout the early to mid-seventies, and it was a pleasure to hear him play songs I had once thought lost to time. His creativity, inventiveness and joy shone through his playing, and it was a pleasure to see Levin crack a smile while listening to the many blistering solos he provided during the set.

It’s hard to articulate the importance of finally experiencing pieces like “Starless” and “21st Century Schizoid Man”. In both instances, the crowd lept up to give a standing ovation mere moments after the final chord played. Throughout the show Jakszyk’s vocals and guitar playing were immaculate (sans one awkwardly missed chord during “Epitaph”) and fitted the mood perfectly, and the three drummers reinforced and reimagined the intensity and drama of these old compositions. One surprise was – in a night of drum trio pieces – Harrison having a simply phenomenal drum solo during “Schizoid Man” that left me in awe. Fripp played his brand of insane tritonic beauty seamlessly, and while Levin was a tad too low in the mix where I was seated, he was undeniably in top form. The only song I was left relatively underwhelmed by (as opposed to getting goosebumps as I did with nearly every other track) was “One More Red Nightmare” which – quite possibly due to the slightly lacking low end – left it less an interesting song and more another instance to be hypnotized by the drummers playing alternately in-and-out of sync. Which is not exactly the worst complaint, but the album version carries an intense darkness I wish came across. Luckily it did in every other piece.

I thought I would never get to see King Crimson, but I did. I cannot accurately convey the personal importance of this, or how wonderful the night was – even if that’s literally the job of a concert review. All I can do is listen to their discography over and over and stare at the set-list obtained from King Crimson’s website in awe. If you get a chance to see them, take it – who knows when they will hold court again?