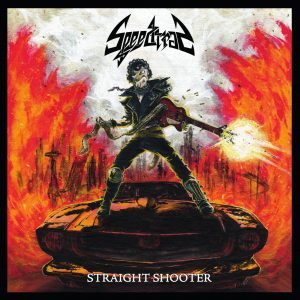 Released on September 11, 2015 via Svart Records

It’s absolute ludicrous to think you’re reading this and you’ve never heard of Speedtrap before, right? My sentiments exactly! No one does speed metal better than these Finnish maniacs! If you’re reading this and thinking to yourself “what is speed metal anyway? Is it just a bunch of idiots playing as fast as they can?”. Well, you’re wrong, so allow me to educate you.

So, some people might argue, but speed metal predates thrash metal and was derived from the New Wave of British Heavy Metal (NWOBHM) and has some key characteristics that make it stand out. It’s incredibly fast, sometimes rather abrasive for most tastes and incredibly technical and demanding. The vocals are usually varied from a very high pitched frequencies to more melodic type ranges. So pulling it off means you know how to handle an instrument and push yourself to the very limits.

I would like to make a pretty bold statement and say that based on previous releases Speedtrap are probably head and shoulders above everything else remotely similar. Do yourself a favour and check out their EP Raw Deal and first full-length Powerdose. They’ve gone one better and released their second full-length titled Straight Shooter and it’s exactly that! It’s a fantastic release that is just absolute heavy metal worship throughout. Think speed, technicality, solos, incredible leads, bass and drums that are just on point. The vocals add that final touch that just does it justice at every level.

The approach to this album is to go all guns blazing from the get go. They start off most if not all their songs with an incredible solo in one form or another and have multiple solos in a single song. My inner metalhead approves and at this point I have the biggest grin slapped across my mug. From purely a composition point of view, ensuring that technicality and complexity flow throughout the album is phenomenal. The more you listen to the album the more the technicality and musical showmanship seems to surface and the music is incredibly demanding, which to most musicians would be a rather daunting task, especially when the tracks are by no means short lived. They tend to vary the pace to accentuate some of the rhythms, which gives the whole album a good balance.

I feel that their previous release was a banger and it was my album of the year in 2013 without a doubt. I might have a problem this year deciding which album to pick, cause this is a master piece from start to finish. If these dudes haven’t already, I would think that they’ve really put themselves and Finland on the map with this one! So if you want somethings fast, relentless and just technically brilliant, I would highly recommend you get yourself a copy of Speedtrap’s Straight Shooter, which is available from the 11 of September through Svart Records.