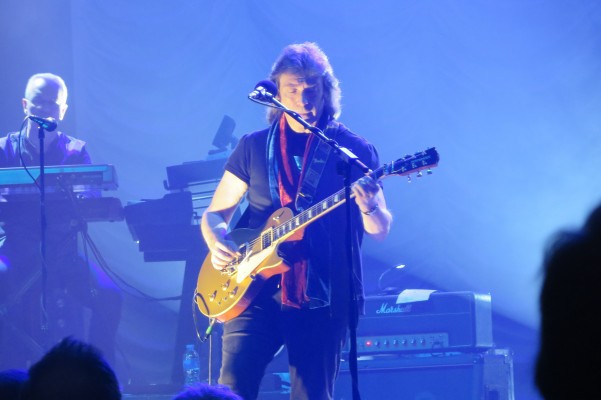 Back in Australia, I applied to fill the Mike Rutherford role (bass and guitar) for an early-era Genesis tribute band. I’m a guitarist by trade (or rather, it’s a trade I aspire to) and had never played bass, let alone owned one. And yet – this band were playing ;Firth of Fifth;! I felt I had to give it a shot, particularly while I was still searching for a drummer for my own material. So I learnt all the bass parts to ‘Firth’ on my telecaster and sent a recording showing I could do it. I auditioned and got the part, bought a bass and spent the next year and a half or so really digging into pieces from Steve Hackett’s tenure with Genesis. Playing this music in a band, more so than any of my dedicated listening, truly revealed how much depth can be found within the work of early Genesis.

So finally being able to see Mr. Steve Hackett live at the O2 Shepherd’s Bush Empire was always going to be special. I was also pleased because, in spite of all my unabashed worship of the band above, this tour had Hackett playing solo material again after a lengthy run of “Genesis Revisited” shows. It’s a tough act to balance for a guy like Hackett. He seems to be the only member of Genesis to genuinely love that early material, but he also has a storied and prolific solo career which he wants to showcase. This tour, verbosely titled “Acolyte to Wolflight with a sprinkling of Genesis”, seemed to show Hackett catering to both sides of the equation – the first set would be solo material, and the second set would be what Steve casually referred to as ‘the G thing’.

Possibly the only critique of the first set is the title is somewhat misleading – the show should probably be called “Acolyte and Wolflight”, as the set focused almost entirely on his 1975 debut Voyage of the Acolyte and 2015’s Wolflight. Although it was great to see these albums delved into in detail, a wider spread would have been enjoyable. Fellow E&Der Chris McGarel (who had an unfortunately abominable stuff up with seating thanks to the venue’s staff, leaving him watching the entire show from the bar!) suggested a chronological approach which would have been great, perhaps one or two tracks from each album. But this is all nit-picking – when the set opened with ‘Spectral Mornings’ from the 1979 album of the same name, you knew you were in for a ride. The band were on fire: Roger King on keys, Gary O’Toole on a seriously decked out drum-kit with two bass drums (and himself decked out with a bowler hat), Rob Townsend on sax and flute duties, Amanda Lehmann (Hackett’s sister-in-law) on guitar and vocals, Nad Sylvan on vocals and theatrical Peter Gabriel impersonations, as well as Roine Stolt (of Flower Kings and Transatlantic fame) in my beloved Rutherford role – and, incidentally, looking a lot like a white-haired Geddy Lee.

The Wolflight material stayed true to the recent studio recordings, but benefited from the surround sound setup of these live shows. What really impressed me with this material was how well the vocal harmonies (of which there are many) held up in a live context. During “Loving Sea” – a beautiful acoustic piece that somehow manages to just avoid falling into cheesy yacht rock territory – the swell of vocals (performed by Hackett, O’Toole, Stolt and Lehmann) filled the room perfectly. This would be the case for the rest of that album’s material, until Nad Sylvan took the stage for Please Don’t Touch’s ‘Icarus Ascending’.

Thus began the earlier material, and seeing Hackett sink into ‘Icarus’ as well as four pieces off Acolyte was a great thing to behold. The story goes that Hackett put all of his songwriting energy into this album, which meant he felt a little at a loss when contributing for Genesis’ epic The Lamb Lies Down on Broadway. True or not, Acolyte certainly finds Hackett showing off all of his immense talents. His signature tapping, time signature hopping and that infamous sustain were all on display during ‘Star of Sirius’, ‘Ace of Wands’, ‘A Tower Struck Down’ and the behemoth ‘Shadow of the Hierophant’. Steve noted that they had previously only played excerpts of ‘Hierophant’ elsewhere in the tour, and that tonight we would have the piece in its entirety. Although I’ve always enjoyed the piece, I tend to prefer other tracks off the album. Live, however, the beast truly reveals itself. O’Toole completely unleashed on his kit during the lengthy coda, morphing the song into a polyrhythmic frenzy while Hackett and Townsend somehow manage to keep the main motif afloat. It built and built to a completely unforeseeably huge climax. A simply splendid way to end off the set!

Whilst the first half of the show found plenty of stragglers slowly coming in to the set – an unfortunate side effect of those only keen to see a heritage act playing the hits – by now everyone seemed here and at the ready, and my faith in Hackett fandom was renewed by hearing people still humming the coda to ‘Hierophant’. After a short interval, the time had come for ‘the G thing’. What was interesting – and again, just shows how much Hackett appreciates his time with Genesis – was the set was not necessarily one that puts Hackett in the spotlight. There was no ‘Dancing with the Moonlit Knight’ or ‘Dance on a Volcano’ here, instead for the most part Hackett was on finger picking and strumming duties. This by no means belittles the set list choices, which focused more on deep cuts or songs that fans had requested he do for a long time.

One of the highlights had to be ‘Can-Utility and the Coastliners’ – a piece I have always loved dearly but seems destined to be forgotten on the album that contains ‘Watcher of the Skies’ and ‘Supper’s Ready’. Nad Sylvan dived into his Gabriel role with complete abandon – only getting carried away and acting a little too much like a court jester on a few occasions. The second half of the song, originally an instrumental showcase mainly for the Tony Banks’ epic chords on the mellotron was perfectly reproduced by King and, like ‘Hierophant’ before it, managed to give you the feeling it was the most loud and epic thing you ever heard. A large chunk of Selling England By the Pound was up next, with ‘After the Ordeal’ showcasing Hackett’s nylon string mastery (as well as how goddamn good Stolt is at playing any instrument, with him also on guitar here). Townsend used the sax in lieu of the flute here, and for a lot of these Genesis pieces (in spite of also having a flute) and to his credit it worked really well, gelling with Hackett’s tone seamlessly, to the point it was sometimes hard to distinguish who was playing what!

As soon as Stolt took up the classic double neck bass and guitar, I knew what was coming. The band launched into a simply perfect rendition of ‘The Cinema Show’. Sylvan did a great job, easily tackling those perpetually changing vocals – going from a whisper to a falsetto to pure strength. A little disconcerting was hearing King’s keyboards issue out an almost perfect 12-string replica in the intro, but I soon got a hold of myself as the song got closer and closer to the change. The keyboard solo of the piece is a masterful composition, and here it was masterfully executed. My stint in a Genesis tribute band found us playing an abridged version of the solo in a medley and even though for Hackett and Rutherford it consists of basically playing two chords for about 5 minutes, the music is that good and powerful that I would happily jam on those simple notes forever. King absolutely nailed his part, somehow finding the exact keyboard sounds from 1973. It was incredible, and even as I mentioned it doesn’t leave Hackett with much to do, it certainly shows off the talent of everyone else in his band.

So, of course, we had to get some tunes that show off Hackett’s prowess. And we do when the band launch into ‘Firth of Fifth’. Hearing that guitar solo played by that guitarist is a simply wonderful experience, as well as all the 13/8 glory that precedes it. The infinite sustain, the overwhelming bass pedal sound (presumably enacted by King) and the sheer transcendence of the piece overall made it the perfect showstopper. Firth is the piece that made me decide to audition for Genesis tunes on an instrument I didn’t even play, and it was the last song we played as a group before I headed off to London. I could say so much about this track, but it’s all been said before. A wonderful end to a wonderful night.

The two set approach seems to be working for Hackett and, even though I would happily see a show of purely solo material, being able to finally hear some songs that I would normally never have been able see live was a great experience (I checked – Wikipedia tells me the first album Genesis released while I was alive was We Can’t Dance. Yuk.) Regardless of what material he chooses to focus on, one thing is abundantly clear: Hackett and his band still have it and are a delight to watch.

Set 1 – solo Hackett:
Spectral Mornings
Out of the Body
Wolflight
Every Day
Love Song To A Vampire
The Wheel’s Turning
Loving Sea
Jacuzzi (w/ John Hackett)
Icarus Ascending
Star of Sirius
Ace of Wands
A Tower Struck Down
Shadow of the Hierophant

Set 2 – Genesis:
Get ‘Em Out By Friday
Can-Utility and the Coastliners
After the Ordeal
The Cinema Show
Aisle of Plenty
The Lamb Lies Down on Broadway
The Musical Box

Encore:
Clocks – The Angel of Mons
Firth of Fifth