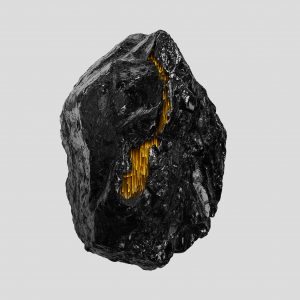 Holy fuck, what have we gotten ourselves into here?

I start the album and immediately attempt to figure out some sort of label for it, some sort of comparison. Fingers sifting through the rolodex of my mind, I pull out genres like psytrance and industrial rock bleed them into dub-step and prog and just watch the pieces fall apart. I can’t put my finger on it, there’s definitely a familiar sound here but, it’s in vague shadows of mainstream acts like Tool and Pendulum and loose collages attempting to compare the band with acts like Tiny Fingers and Rocket Recordings groups such as Hey Colossus. The darkness in the album is instantly tangible, the hybridity, the choice of source materials, I don’t know how to frame what I’m listening to, I simply decide that it’s current or perhaps even premonitory.

With an opening riff buried in a thousand waves ‘Infinite Eyeball’ leads us by the hand like smoke fingers from a cartoon pie further and further down the rabbit hole. The vocal melody like an alien pop classic chewed up and regurgitated for our pleasure is one of the best hooks I’ve heard in a song in fucking ages. I can only make out a fraction of the lyrics and yet this undigested melody is so palatable on the ears and imitable to the lips/via the larynx. The dark acidic eastern sound purveys through from the first song with post-dubstep glitch eruptions and bassy undertones that swelters beautifully under the pressure of it all. The song kind of winds down with pounding drums that hammer and hammer and hammer and hammer…and then stop.

‘Axe’ attacks almost a cappella then corkscrews its way forward with building pads and plucking trancey guitars. That familiar beat like a pulse immerses itself in the music and takes root, I’m glad to see it still works…even in this unfamiliar context.

The next song ‘Module’ is like a soundtrack to a carnival created by Salvador Dali; melted tones brawl with stabbing jagged guitar hooks creating a sonic landscape that evokes flashing lights and chemically dizzy wanderlust. Call it Stockholm syndrome but, as the song progresses these disorientating elements eventually seem to coalesce into a charming drone-soaked raga and I’m left completely lost once again. Imagine doom metal played by a shaman in pre-colonial arabian sand dunes, ritualistic insanity married with futuristic forebodings of dark atonal dystopia. The song builds and builds, this band does not do bare. The Naturals add layers upon layers until you can feel the music like a textured canvas where paint envelops sticks and bones to the point where you can almost feel the art without ever being able to lay your hands on it. I have to question as to whether or not the album’s title Hive is derived from these layers that swarm and multiply with the violent and majestic intensity of a wingy stingy thing.

A perhaps more straight forward track follows ‘Module’, a percussive synth falls into the foreground arpeggiating in a manner that evokes water drops plummeting from the roof of a cave. This delicate melody is juxtaposed against a meaty distorted howl before the track settles into a reverb soaked chamber piece. ‘Cold People’ is a slow burn. A track perhaps more shoegaze-esque then anything else on the album, on this song The Naturals slowly build the layers in like a fast drive down a long highway; our eyes dart around at the passing neon lights and flickers of billboards as our hearts race in anticipation. There’s always a red light bold as a brass baboon’s ass somewhere. A nice ride indeed but, the track comes to a halt.

‘Cauldron’ interjects as a glitchy, mathy, post-rock recalling computer ballad. The reverb is strong in this one. The vocals again have a pleasant melody, I wonder what sort of music this guy listens to… his singing is kind of proggy but, also kind of eastern sounding at the same time which I guess is not necessarily a big leap considering the influences on prog are pretty eastern in the first place. In any case, singers will like the singing on some of the tracks on Hive, some of them are a bit closer to having a Pendulum sound where others are a bit more eccentric and idiosyncratic.

Gnashing riffs against a grinding guitar scrape. The cerebral chorus of dental implements tearing your face apart whilst the nitrous oxide tank is still half full. There’s an inherent menace in this…’Its Teeth’ suggests something sinister. A beast that tears the unsuspecting to bits. An unparalleled notable savagery but, this track is a bit more eclectic and perhaps even soft than its title would suggest. It’s not entirely a misnomer because the rhythm and the almost sawtooth nature of the track but, I wouldn’t go into it expecting something that could eviscerate you like you were the last watermelon on Earth because it just couldn’t have that kind of gargantuan ferocity. Frankly, I can’t imagine many bands could conjure such inhuman brutality.

A fitting conclusion to the album. A blend of elements through out the album, the sum total of its parts; the realisation of the band’s efforts throughout Hive. The track has a sound that initially reminds me of Teeth of The Sea but, that quickly goes out the window and before the mid-way point even arrives, the conclusion I come to is that this is a song that is simply unique to the band. The album closer drives home the charms of The Naturals, excellent vocal melodies, carefully explored layers and dark beautiful production that emphasises it’s low-end to accentuate the barbs of its razor’s edge shrills. I wish I could detail the ways in which instrumentation is expertly applied but, a lot of the time the sounds on the album are so alien that I can only give vague descriptions of what each track features and that is one of the best things about Hive. It’s a different animal altogether and strange and warped as it is…its allure to me is powerful.