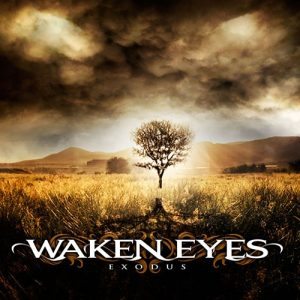 Released on October 30, 2015 via Ulterium Records

Waken Eyes promote themselves as a band of prog metal ‘all-stars’. However, you certainly need to be in the know to be aware of its members. Guitarist, keyboardist and composer Tom Frelek is supported by Henrik Båth (Darkwater) on vocals, Mike Lepond (Symphony X) on bass and Marco Minnemann (Steven Wilson, The Aristocrats, Joe Satriani) on drums.

Waken Eyes’ debut album Exodus is a highly polished affair (mastered by Jens Bogren, who created that immaculate sound in Opeth’s Ghost Reveries) featuring some stellar musicianship, but unfortunately is bookended by some prog metal by-the-numbers. Whilst everyone is clearly very capable at playing their parts, and there are genuinely good moments to be found therein, overall the first few tracks come off as lacking. It’s when we reach the fifth track, ‘Palisades’, that things start to pick up.

This starts a chain reaction of really interesting material over the next four pieces. We are treated to some really interesting dynamic moments, the band shining during quiet sections that really showcase Frelek’s knack for Opethian progressions. Whilst earlier in the album these moments could come across as contrived, with pieces like ‘Palisades’ and ‘Cornerstone Away’ the band somehow break through this barrier. Both these pieces also show a Lepond that is really on fire, playing some really great riffs and locked in perfectly with Minnemann. Båth also has some really interesting melodies here, escaping the rather conventional “catchiness” that plagued ‘Back to Life’.

This continues on with ‘Cornerstone Away’, easily the standout track of the album. The band experiment further and finds Båth swapping vocal duties with Kristine Bishop to great effect. The piece acts like a rather straightforward ballad at the beginning, but morphs into something else entirely so that by the end the band is stuck in a heavy 5/4 groove that Lepond and Minnemann really get to sink their teeth into. It’s a great moment, and a glimpse of what this band is capable of.

And although this momentum continues on through ‘Still Life’ (the title itself revealing the Opeth-debt if one hadn’t picked it up already) and half-way through ‘Arise’ before dropping off. With Exodus, Frelek has surrounded himself with great musicians and has a professionally made product, but only in parts does it really take advantage of either aspect.

It’s an absolute shame the enjoyment of those middle songs couldn’t extend into the 19-minute title track that closes the album. Although ‘Exodus’ is certainly listenable, it doesn’t leave a lasting impact – but that’s exactly what a mammoth track like that should do. After a 20 minute piece the listener should either feel exhausted or exhilarated; preferably both. Instead we either have promising sections that turn predictable, or segue into seemingly unrelated sections. There’s no sense of the grand journey that one wants to take in a piece of this length.

Exodus has some promising tracks featuring playing by masterful musicians. But for the most part, it descends into an album of unmemorable prog metal tropes, and that’s disappointing.