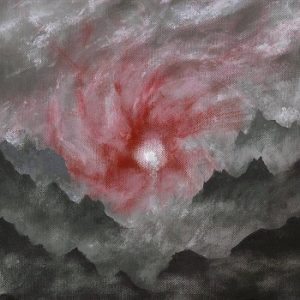 There seems to be a bit of a cottage industry growing round Goat these days. Not content with being one of the most celebrated psych bands of recent years, they have also had a hand in the success of Hills (who may or may not be Goat depending on who you speak to) and now Capra Informis which is essentially the djembi player who felt he/she had a bit of downtime in their busy schedule to record some extra tracks on his/her own. As suits the mystique around the player to the extent that we cannot even be sure of the sex, the music that Capra Informis deliver is equally mysterious and ambiguous.

At only four tracks long and clocking in at the twenty minute mark there is a distinct lack of something building into a cohesive whole but as a primer EP it’s simply a revelation to hear another side of Goat. Where-as the mother group follow avenues of “world music” filled with caterwauling banshees, Capra Informis is much more measured and ambient. The roots of Goat are there, they are just taken down a different alley.

So whilst lacking in length, the deep psych on offer is rather good and follows a path set by mid-period Pink Floyd at times before veering off into Amon Duul territory. With a complete lack of structure about the four tracks, each set around a distinct pattern or rhythm, the music is heady stuff which requires some tuning in to turn on.

Beneath the ambient textures are familiar tribal rhythms and chanted vocals only this time they serve to colour the background rather than thrust the music forward. Title track, ‘Womb Of The Wild’ hurtles on a never-ending path, regurgitating the same mantra over and over creating a trance-like stupor as you find yourself listening closely for slight variations.

‘Cold And High’ leans towards a much darker place and signals a move to areas Goat would never dream of going to. This is a good thing and it is now that you wish the length of these tracks was longer so you could really sink your teeth into them. Before you know it you are on to final track ‘Enter Thaumiel’ which sounds for all the world like a long lost Floyd track circa Saucerful Of Secrets. Slightly derivative it is nonetheless thrilling.

Whether we see more music from Capra Informis, we shall just have to wait and see. On the basis of the twenty or so minutes here all we can do is hope for a full length effort as it is a remarkable piece of work. Less histrionic than Goat, it is also a lot more satisfying too. It also means that the cottage industry is turning into a thriving business which can only ever be a good thing when the music that is being made from all members is of the highest quality.