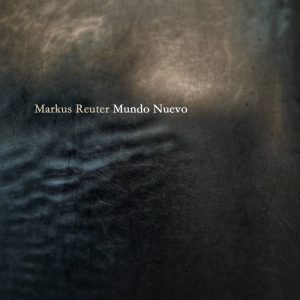 Guitarist, composer, producer and honorary King Crimson member due to his affiliation with Tony Levin, Pat Mastelotto and Adrian Belew with Stick Men and The Crimson ProjeKCt; Markus Reuter is always looking for a challenge.

His dedication to continually exploring and improving his musical ability came to the forefront last year with Sultry Kissing Lounge, Sultry Kiss and Quit Being So Gray. The three albums consisted of solo improvised pieces by Reuter that opened live shows for The Crimson ProjeKCt all around the world. The sheer act of releasing one, let alone three, albums is enough to reveal how different the guitarist approaches each performance, and how determined he is to create something brand new every night.

With Mundo Nuevo, Reuter is similarly releasing improvised pieces from the opening of Stick Men gigs in South America. Wanting to push the music further, Reuter asked musicians who were in attendance at these shows to overdub their own music over the soundscapes. In total, six other musicians guest on the album – most famously jazz guitar legend Wayne Krantz, and fellow Stick Man Pat Mastelotto.

For those who’ve not heard Reuter’s soundscapes, comparisons to King Crimson’s Robert Fripp are inevitable. The heavily sustained guitar notes and almost synth-like qualities to the chords certainly bring back memories of interludes in Crimson albums like THRAK or The Power to Believe (not to mention Fripp’s solo work),  but here the similarities end. For one, Reuter’s choice of instrument – the U8 Touch Guitar (which if you haven’t seen, is worth a quick Google) – is played entirely by tapping. This is incredibly different to Fripp’s meticulous picking style, and gives Reuter a distinctive flavour.

Typically dark, moody and cerebral, the guest musicians particularly shine on Mundo Nuevo when they also emphasise these qualities. Mastelotto unsurprisingly fits in perfectly during the opening track, given how long these two have played together. While their piece is not necessarily surprising in any way, it’s certainly a pleasure to listen to. The other pieces, without the stability of drums, are a lot more free-flowing. Lilian Giubetich’s cello tracks really highlight the dark and brooding side of Reuter’s soundscapes with their guttural low end, and Alex Anthony Faide’s ecstatic use of the whammy bar in the opening of Part 4 is particularly inspiring, giving the piece a feel reminiscent of latter-day Talk Talk.

Wayne Krantz’s piece finds both guitarists coaxing all manner of interesting noises out of their instruments and is possibly one of the more explicitly odd tracks on the album. It begins with Krantz playing as one familiar with him might expect, lightly effected clean guitar playing jazzy arpeggios, but soon devolves into all sorts of clanging noises and ends with an almost-quotation of Miles Davis’ ‘It’s About That Time’.