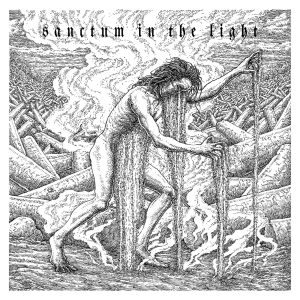 From Edinburgh emerges Of Spire & Throne, an extreme doom metal outfit who at this point have a few EPs under their belt and are having a crack at a full-length, Sanctum in the Light. Doom of this style have many contemporaries making a hell of a racket in the darkest corners of creativity; the likes of Lycus and Bell Witch being prominent. So hearing newer bands honing this deeply heavy, monolithically paced metal is always interesting.

It is clear from track 1 that there will be no light here. The 14-minute monstrosity ‘Carrier Remain’ makes sure of that, funeral doom style instrumentation with gargling vocals that when joined together forges a sense of eternal dragging to the bowels of the Earth. The track builds through this intense passage until the speed picks up in the drumming, and the riff work begins to really make itself known. A bass tone drags its corpse from the swamp, it sounds so distorted and heavy it pulsates and rumbles in the mix. The track reaches its thundering end, a crushing and punishing start to the record.

‘Fathom’ is a thoroughly enjoyable track and a serves as a much needed interlude before the storm to come. The track demonstrates the bands ability to steer away from solid doom riffage by delivering a mind melting drone that leaves you unable to tear away. The hypnotism in the guitar drones then perfectly transitions into unnerving electronic quivers that drags the remnants of the instrumentation into the depths.

What follows this is the highest moment of the record. ‘Upon the Spine’ confirms that Of Spire & Throne aren’t just another doom band, rather they take the genre and abduct it further into darkness, if such a feat be possible. The track’s opening guitar melody is beautiful as it is dissonant and serves as an excellent change in the albums sound until this point. Ali Lauder’s vocals remain forceful and guttural, a feature throughout this record that gives the album its death metal feel. The mid-point of the track begins to build to an acceleration in the drumming, cacophonous as they begin to pound in unison with the guitar work. Lauder’s vocals rise from their deeper reaches and become more frantic as the track plays out to its noisy climax, leaving a vast trail of destruction behind it.

The final and longest track here, ‘Gallery of Masks’, exhibits the band’s use of synth and harmonium in the biggest way so far. The creation of a cold scape that leads from the crushing track before emphasizes the devastation caused, a true delivery of nothingness that allows for the most open breath of chilled air on the entire album. This dark whisper of synth then transitions into another massive dose of doom; vocals are absent here, allowing the musicianship to ravage your headphones.

Sanctum in the Light from the opening listen would have led one to think it gets redundant; the varying passages in tracks like ‘Gallery of Masks’ destroys this expectation as it continues to incorporate synths in the inter-changing passages of pure doom metal.

On entering this sanctum of sound, it’s easy to dismiss it as another record in the white noise of extreme metal. By no means are Of Spire & Throne trying to reinvent the genre, but Sanctum of the Light is a testament to a band who has the potential to rise to great prominence within it. This album is an incredible dose of extreme, death tinged doom metal that is more than worth your time to explore its cavernous chasms and darkest dimensions.