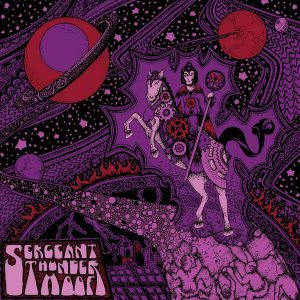 Released on November 5, 2015 via Independent

One of the most striking aspects of this second album from Sergeant Thunderhoof is a rather majestic flow, which takes a run of six songs and turns them into something with much grander allusions. Taken at surface level you may think that there is not an awful lot of new going on, but taken as a full on narrative, a whole new world opens up. Complete with a knowing attitude that whilst they take their music very seriously indeed, there will always be some over the top aspects and why not have a bit of fun with it.

So Ride Of The Hoof starts with a gallop with the epic ‘When Time Stood Still’, which is full of portentous riffs and rolling vistas of bass and drum rolls. Full on metal with one foot in doom and the other in stoner, Sergeant Thunderhoof have done their homework and know what makes each sub-genre tick. By the time the inevitable whinny of a horse leads into a clatter of hooves on second song ‘Planet Hoof’, all reservations have been cast to the wind and you will be fully on board.

The great thing about Ride Of The Hoof is that the quality level not only stays the same, but actually rises up a notch and on arguably the best song here, ‘Enter The Zigurat’, they move on to another level as the pace slows down, but the music gets heavier. Following this with the near 14 minute ‘Goat Mushroom’ serves to make an unbeatable part of the album that more than matches anything else released this year.

Throughout this album there is a great tightness to the musicianship and no matter which avenue they choose to explore next, the band keep up with each other in perfect symbiosis. Reminiscent of Iron Maiden at their peak, Sergeant Thunderhoof are more than willing to introduce more progressive concepts into their music to keep things interesting. Old fashioned it may well be, but it certainly makes for a fun ride.

It’s often difficult to stand out from the crowd with music like this and with standards being so high at the moment you really have to tip your hat to Sergeant Thunderhoof who leave you begging for more. If the sign of a good album is its ability to make you return for repeated listens then Ride Of The Hoof is definitely going to be a mainstay on your record player. Faultless in delivery, it may be let down by moments of small naivety, but on the whole it’s a quite fantastic release. Highly recommended, you may find yourself hooked and wanting to come back for more. 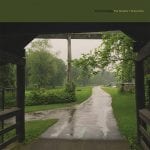