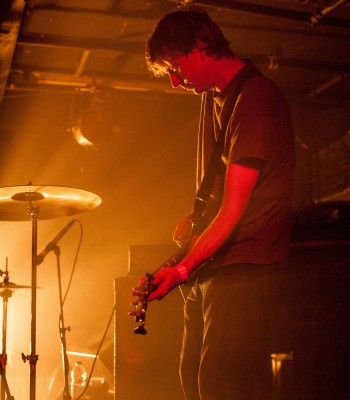 When our writer Richard Collins isn’t smashing out reviews for us, he spends some of his time putting on gigs with his mate Lins at a night called Cosmic Carnage. When he’s not doing that he can often be found talking complete bollocks, we have decided to capture some of this bollocks and call it the ‘Cosmic Roundup of 2015′. He’s caught up with shit loads of our favourite people from across the scene and we’ll be publishing one every day until we run out… like a brutal advent calendar! We kick off proceedings with Joe Thompson from undoubtedly one of our bands of the year, Hey Colossus. Enjoy!

CC: You seem to have been even busier than usual this year, two Colossus records, one Blacker record, a split and relentless touring… how’s it been?

JT: I’ve blanked it all out. (HA). I spent three weeks in Australia in April though. That was good fun. I even enjoyed the travel, getting to sit, be fed, watch films, and then visiting family, going to water parks, being in a warm sea.

JT: It all fell into place.

CC: Both Colossus were a departure from the usual stuff, how have the fans reacted?

JT: I noticed this on Twitter the other day:

“Listening to Hey Colossus’ Dominant Male LP at the moment via Spotify to see if I can at least gain some enjoyment from it….”.

I think people only just discovering the OLD stuff are gonna be in for more of a shock. If you’ve been into it for a while, followed the trajectory, and you’ve stuck with it, MAYBE it makes sense.

CC: You’re getting bigger and bigger, how far do you think you can take this?

JT: You got to have SOME ambition just to get up and play, even the ultimate harsh noise act has ambition – be it to clear the room or entertain noise music fans. To deny it is to deny the TRUTH. Ambitions vary and doing this for 12+ years has taught me many things, but the MAIN one is that doing it with friends and playing to 20 people or 200 people or just rehearsing is a victory in itself. We juggle a lot to do it – we have 7 kids between us, we have partners, jobs, and football season tickets. How far can we take it? To get this far is a miracle – ambition…you gotta have it….but it can eat you alive.

JT: SOAN in Notts and Milhoes De Festa in Portugal. Two gigs, both ends of the spectrum, both EXACTLY why we do this.

CC: What are you up to next year? Three Colossus albums and two from Blacker?