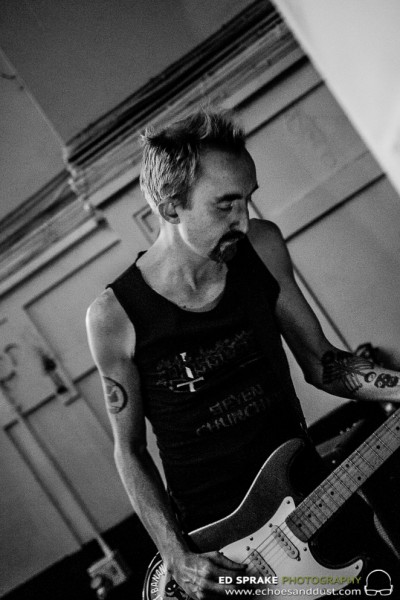 It’s been another great year for long time Echoes & Dust favourites Teeth Of The Sea with Highly Deadly Black Tarantula was released to great acclaim (#10 in our writers’ Record of the Year poll) and a successful UK tour completed. Richard grabbed a few minutes to chat with their intergalactic riff shredder, Jimmy Martin.

JM: Very well thanks! 2015’s been a pretty amazing year, but a bit of a blur – I honestly struggle to remember what happened for most of it – we all managed to cram a lot of mayhem and intrigue in somehow or other, and even now it’s winding down there doesn’t seem to be a spare moment. There haven’t really been enough hours in the day to get everything we wanted done, has been the only problem.

CC: Since the Master album you guys have played massive gigs and have been flying. I thought you’d build on this and get a bit more mainstream but you gave us Highly Deadly Black Tarantula, which is your darkest and most experimental album to date. Explain yourself young man…

JM: I’m not sure we’d know how to go mainstream if we tried. There’s very little rationale to what we do really – we just hammer away and whatever sounds pleasing to us goes down – what happened really in retrospect was that MASTER took ages to make – there was a three year gap between Your Mercury – our second album – and that one, and we wanted to do something a lot more stripped down and concise, and a bit more aggressive and raw. I love MASTER but with critical faculties rigidly applied it’s a bit of a sprawling opus, and the band as a whole had been listening to a lot more electronic music (well apart from me, who’s still sitting around with ‘Sin After Sin’ by Judas Priest on repeat!) and we partly wanted to get back to our roots in a certain kind of way – it’s easy to forget that we started out essentially as a noise band influenced by Load records, Wolf Eyes and bands like This Heat and Liars. The dark, experimental thing happened purely by accident.

CC:: How’s it been received in general?

JM: I’ve been very gratified by how many people seem to get it, and how well it’s gone down. Some of the praise has been kind of overwhelming. It’s a cliche to say, but you never have an objective sense of how your band comes across to other people. As Blackie Lawless from W.A.S.P. said to me once in an interview (quite seriously) it’s like there being a hundred foot mural, and you’re stood with your noise right up against it. In my experience, that nose is always pressed up against a mistake or a bum note that’s driving me mental.

CC: Your live shows are normally uplifting, has the new album changed the dynamics? Is it more intense now?

JM: Life in Teeth Of The Sea is always intense, much like the life of a repo man. I always feel like the two experiences are pretty different really. We’ve only being doing two songs from Highly Deadly Black Tarantula on the tour, but both of those still come across as just fairly full on and euphoric, just in a slightly darker way. We’re going to work on more tunes from that album for 2016, and just keep working on the set and experimenting. We’re never happy to stay in one place for too long or get complacent.

CC: You also now play guitar for NWOBHM band Angel Witch, how the hell did that come about? It is it as fun as it sounds?

JM: I was recruited by Will, who plays bass in that band, who I’ve known for years – I’ve been hanging around the London metal scene for fifteen years odd as a journalist and a rivethead alike – and of course I jumped at the chance, being a big fan of the band. The Angel Witch debut is one of my favourite metal albums ever recorded, and it’s a complete honour to be playing those tunes, and a total blast. It’s all about doing ’em justice! The first gig was almost like an out of body experience – obviously I’ve been playing metal guitar for nearly thirty years so a certain amount of it came naturally, but I’ve actually had to practice properly to get my chops in shape for the first time in a good decade or two, and it’s an extremely different discipline to what I’ve been doing in Teeth Of The Sea, which is way more about treating the guitar almost like a signal to be processed, and more about getting the million-and-one effects pedal changes to go in the right places and the cues – Angel Witch is more like a combination of heads-down aggression and fierce technicality. There’ve been some amazing nights – one show in particular at the Wings Of Metal fest in Canada was absolutely nuts, the most hysterical gig I’ve ever played. The audience was absolutely rabid.

JM: I think we’d all agree the show at the Islington Mill in Salford took some beating – the Fat Out crew running the night did an amazing job, the turnout was great, we danced like loons til the small hours, and it was the end of the tour so we were unusually tight. Bona fide buzz. Best venue in the UK?

Boredoms at The Barbican
Container at Oto
Alessandro Cortini at Oto
FIRE! at Incubate
Hey Colossus at Milhoes De Festa
Powell at The Electric
The Heads at Roadburn
Fields Of The Nephilim at Roadburn
Selvhenter at Supersonic
The Bug & Dylan Carlson at Supersonic
The Cosmic Dead at Raw Power
Powell at Semibreve
Magma in Chelsea the day after the election
Perc at Different Circles
Circle at Raw Power
GGU:LL, Karen Gwyer & Anonymous Bash at Supernormal
Sunn(((((((((o at QEH.
Binker & Moses at Foyles
Gnod at the Old Malt House, Bristol

JM: I’d have to be biased here and say Supernormal, as that’s the one I work on, and 2015 was incredible for festivals for us as punters and as performers – Milhoes De Festa in Portugal, Roadburn, Raw Power, Wings Of Metal as I mentioned earlier, Semibreve, Eindhoven Psych Lab – an embarrassment of riches really.

JM: All sorts of exciting stuff in the pipeline, much or which either isn’t announced yet or we don’t want to jinx by banging on about too much – we’ve been talking to one of or favourite artists about doing a collaborative project, which’ll hopefully come to fruition at some point. We should be travelling about a fair bit – already confirmed for some shows in Portugal in April, and a couple more awaiting confirmation, plus some other festivals one of which in particular is pretty spectacular. Plus working on new material that’ll hopefully be even more awkward and alienating than ever. Batten down the hatches.