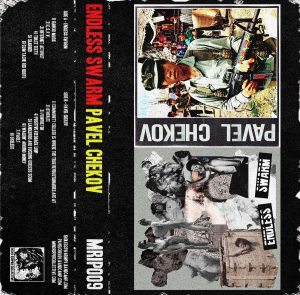 It feels like every year the bar is raised when it comes to splits and every year I make some absurd claim that a particular split is the best one I have ever reviewed and guess what? This year is no different!

It’s been an incredible year for powerviolence and grindcore enthusiasts around the world, and in particular the U.S. and the U.K., especially Texas, California and of course Leeds and Edinburgh. I’ve heard some amazing releases and I take my hat off to the people who have crafted the scene and helped make these places a breeding ground for music I love so much.

On to the split I was rambling about. Anyone who is anyone in D.I.Y. has come across the Mind Ripper Collective, which is based in Scotland and they’ve done some incredible releases this year, which included a Spazzin to the Oldies, a Spazz tribute that blew me away. They’ve gone a step further with a split that includes local Scottish lads Endless Swarm and Dallas warpcore maniacs, Pavel Chekov.

Endless Swarm released Pointless Existence on 7” earlier this year and it blew my face off. So now, they’ve managed to do a split? I can totally get onboard with that. It blasts off, doesn’t really stand on ceremony and what you can expect is crushing riffs, incredible rhythms and some of the tightest drumming around. I freaked out to this over and over again for about 4 days and it just destroys a bit more every time I listen to it. The perfect culmination of the pragmatic approach to powerviolence, which does include some synth-based passages, which gives it that Man is the Bastard/ The Locust feel, but with a bit of a twist. They really found their style and trademark sound, which was also very apparent with the Pointless Existence release, and it brings a tear to my eye. Short, harsh, abrasive and some of the coolest rhythms since Spazz. Endless Fucking Swarm, ladies and gentleman.

Now, I switch my focus to the state that brought you NASA approved ultracore and I give you Pavel Chekov, which I remember discovering on Bandcamp earlier this year or it could have been last year, there are too many releases. Anyway, they have their own brand of fastcore influenced powerviolence, which has been dubbed “warpcore”, which makes me giggle for obvious reasons. It’s fast, disgusting and doesn’t really allow you to process what’s going before it’s too late. It’s warp speed all the way before they completely fuck your shit up with some groovy rhythms of their own, which is seriously kick-ass. But for the most part it’s all awesome riffs on this side of the split, great inserts between tracks and just a whirlwind experience from start to finish. I’m completely blown away by these dudes.

This has to be one of the most complementary splits in terms of band chemistry I have ever reviewed. It all just melts together and culminates into any extreme music enthusiast’s wet dream. If you like fastcore and or powerviolence, which I know you do, you need to get this split. This split kicked my ass from start to finish and I listened to it over and over again. Definitely the split of the year.