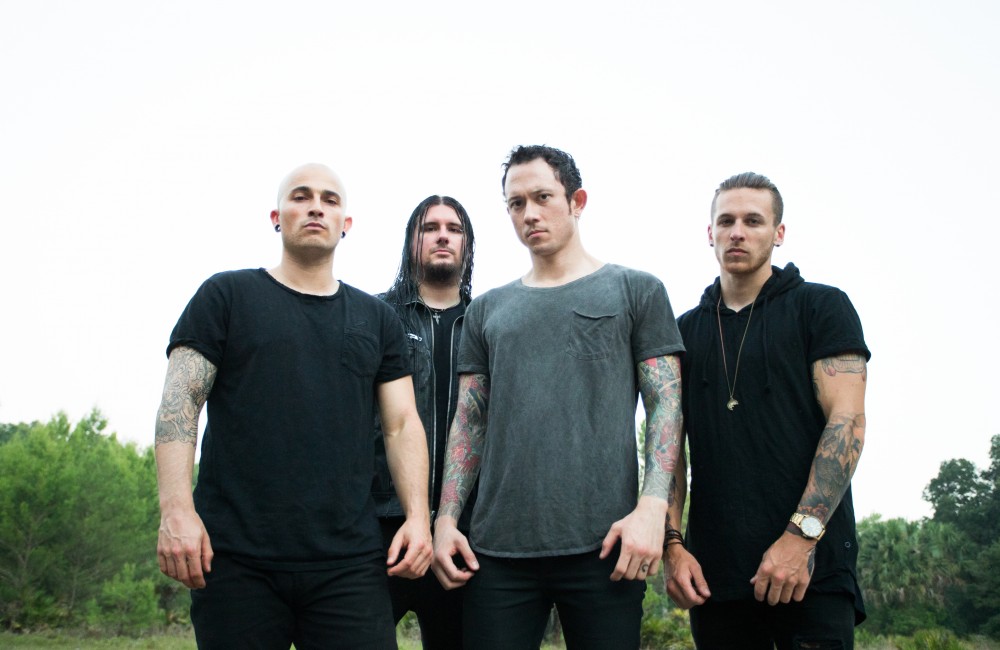 Trivium‘s seven album career has seen them develop a distinctive interpretation of metalcore while always keeping an eye on the classic metal bands that preceded them. Following the release of Silence in the Snow (reviewed here) Nicholas Cleeve asked bassist Paolo Gregoletto a few questions about the inspirations and equipment behind their latest album.

(((o))): Corey [Beaulieu – guitar, vocals] has spoken elsewhere about wanting Silence in the Snow to have a distinctive tone inspired by classic metal – what kind of gear and techniques did you use to achieve that?

Paolo: The one common thread between almost all of our albums has been the gear. For the most part we have used 5150’s or some variant of one. Matt [Heafy – guitar, lead vocals] usually uses his black Les Paul that he has had forever. A lot of the classic heads and gear has stood the test of time.

(((o))): Ihsahn contributed the opening track ‘Snøfall’ to the album, how did that collaboration come about?

Paolo: Matt has been an Emperor fan for a long time and a few years ago he met Ihsahn and they became friends. The idea was sort of last minute since we were just about to start mixing the album and we decided we needed a great intro to tie into Silence in the Snow. Matt floated the idea of using Ihsahn to help us with it and the result is one of the most cinematic sounding intros we have ever had.

(((o))): Should we expect to hear anything from his and Matt’s black metal project Mrityu in the near future?

Paolo: I am not sure when they are going to do it since Trivium is always working. But from the demos I’ve heard it’s pretty different from what we do, which I believe is the intent.

(((o))): How involved were you in the art direction of Silence in the Snow‘s album cover and music videos?

Paolo: Matt, Corey and I are pretty deeply involved in everything together. We usually let someone take point, say Matt with the art or I might go out to the beginning of the mix, and then we all consult and talk about what we want to do. It saves sending emails separately and confusing people.

(((o))): The video for ‘Blind Leading The Blind’ is an inversion of a performance video – you’re support characters at another band’s concert. What inspired that?

Paolo: The guy who did the art and all the videos, Jon Paul Douglass, came up with the concept. The band is actually his father in law’s group and they are a real band, and they even learned the song as close as they could so it looked real. The song wasn’t going to have a video at first, but he came up with the idea and pitched it to us and we loved it. It was a fun video to make and definitely unlike anything we have done before.

(((o))): Compared with Vengeance Falls‘ giant mecha Trivium logo, Silence in the Snow‘s cover has a very minimalist design – what was behind that decision?

Paolo: We wanted to introduce our new symbol, the Oni (Skull), that we had designed last year. At first the art was going to be the drawing of the skull, but we chose to have the mask actually made and take a picture of it. There are four color variants we had made and tried them on a few different backgrounds, but in the end the white on white was the most effective. We wanted the album cover to be genre neutral. So if someone that has no idea who or what Trivium is, they wouldn’t think it’s metal or rock right away, and maybe intrigue some new listeners just by the art.

(((o))): No screaming, influenced by a lot of classic metal bands…is it fair to compare Silence in the Snow with The Crusade?

Paolo: In some ways it is similar and in some ways it isn’t. I think we didn’t have as much focus on one idea as we did with this album. Our ambition got the best of us on that one and we didn’t have nearly the amount of time we should have had to work on it. This album we knew it was going to be a classic inspired, modern metal record. We wrote with heavy singing being the main focus, whereas The Crusade was a bit all over the place vocally. I actually enjoy The Crusade a lot more now, and it’s taken me some time to get over what I didn’t like about it to finally be happy with it. Silence in the Snow had a plan going in and it felt like we knew how to get from A to B this time.

(((o))): Were you thinking about the reception Matt got for barely screaming on that album as you were writing Silence in the Snow?

Paolo: I expect polar reactions to anything we do because we have had it since day one. We don’t let the reactions dictate what we are trying to do. If we have an idea and think it needs to be heard, we go for it. Trying to please everyone is a promethean task for a musician.

(((o))): The Crusade was followed by Shogun, probably Trivium’s heaviest album. Do you see your sound shifting drastically again in the future?

Paolo: It’s really early to say what the next one will be like. Once we have a vision for the record and start writing towards that goal, then we will know if it’s a departure from Silence in the Snow or not. I think we have a lot of room to build upon this last record, but I also like to try unexpected things too. We could always bring in a bit more pro elements again or even acoustic things!