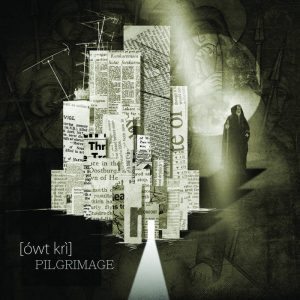 Released on December 1, 2015 via Erototox Decodings

The term dark ambient gets thrown around a lot…

Pilgrimage on some levels fits this bracket and then at the same time it’s operating on a whole other plane.

The opening track ‘Flight To Kailash’ explores several layers of ambience, the strength of the track is the variety of ideas explored in it but, at the same time I wish some of the tracks would feature a bit more often. Flickers of lightly abrasive tones are blended well against the more traditionally ambient pads but, the best thing about it to me is the vocal sounds; there’s a kind of Dead Can Dance vibe about them and they really help to centre the track and provide a melodic backbone whilst adding a layer of sorrow and human emotion to a tense musical backdrop.

‘Static Continuum’ is a pretty cool track. I mean in its basic essence it’s a guitar jam over a syrupy stack of golden pads with a side of butter but, it fucking works. There’s just something about [ówt krì] juxtaposing the choral ambient hymn against a guitar getting pounded to shit that is just awesome. ‘Static Continuum’ is also a fine example of how the album doesn’t always conform to traditional ideas about the “dark ambient” label which traditionally combines dissonant, menacing pads with abrasive industrial elements leaning heavily on the minors and striving to create an uneasy atmosphere wherever possible. That’s not to say that this track is entirely outside it, it’s just a fresh new take employing some face melting guitar work to spice the whole concept up.

Where the previous track departs the next track arrives. ‘From Shadows’ returns Pilgrimage more firmly into a dark ambient bracket with industrial clangs and ambient malevolence evocative of Wes Craven’s Nightmare on Elm Street, the track builds its layers slowly into a crescendo twisting the knife to the point of breaking before quickly fading into the next song.

‘Messe de Requiem’ prominently features a droning two note shrill bouncing back and forth against brass tones and textural depth. However, what I find most interesting about this track is a suppressed melody brewing beneath the surface throughout the track surcease of the stronghold the wider corpus of the piece possesses, it defiantly sings a triumphant tune; this layer never quite escapes the grasp of the bolder darkness of the requiem but, it’s presence is worth noting, it’s an interesting sign of possible directions to explore following this album.

Pilgrimage 1 is a spooky track… for whatever reason it reminds me of Ghost and Dario Argento films/Goblin. It may be the wavy splashes or the crumpled drums or even the lead melody parts that sound a bit like a theremin but the mystique in the track just seems to conjure a grandiose horror vibe. Again, what’s interesting here is that it’s really not something you’d expect in the wider context of the album and I think a pretty good thing about Pilgrimage is that it generally plays with your expectations whilst never really going to far way that it damages the overall construction of the album.

‘Pilgrimage 2’ is very similar to ‘Pilgrimage 1’ initially but, instantly sets itself apart with the first vocals on the album. It’s pretty weird track overall, sonically Cronenberg; warped and horrific but, the allure is still there.

‘Absurd’ reverts the album back into a dark ambient root again, it’s kind of interesting to consider that whenever the album seems to expand it contracts back again; structurally, it makes for an interesting listen. ‘Absurd’ is a pretty sinister track though, whilst it starts off ambient by the end its attained a variety of elements from other songs, broken pianos and squalling guitars, it seaways nicely into the final song.

Here’s the respite again. A nice bit of piano playing. Completely out of character for the album, which I guess makes it a perfect fit for such an eclectic piece of music. The swarming guitar lines come back and bring with them the crushed drums and vocals dotting around delays like a dream in a bunker. This final track embodies the wider aspects of the album combining them into a monument of the album’s eclecticism. A fitting conclusion wrapping everything up and adding a wider context to the preceding works on the album.

Pilgrimage is in an interesting album; a foreboding experimental collection of songs rooted in the dark ambient genre but offering something completely different as well.