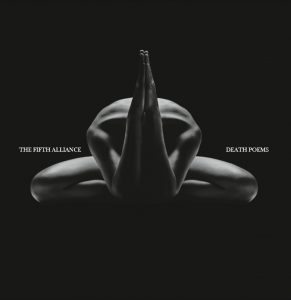 Released on October 30, 2015 via Consouling Sounds

The cinematic black metal of The Fifth Alliance is a peculiar hybrid of intense, crushing desolation mixed with an inviting approachable feel, which is rather quite disconcerting at first, but once you settle into their music, makes perfect sense in what is a completely fucked up world. There is music that is extreme for extreme’s sake where riffs roll in at a hundred miles an hour and guttural growls envelop you, then there is The Fifth Alliance who approach from a different route. Intriguingly, the way they perform their music is more akin to colouring the scene rather than barging right through it and as such, presents a subtle change to the usual black metal shenanigans.

We call it black metal yet it holds very little in common with the usual fare apart from a bleakness and cold despair which pervades every crevice of this record. There is a majesty that arises from the post-BM scene too keeping this more in line with someone like Agalloch who also take a more subtle approach in presenting their music. There is also a deep sludge aspect to the band, which serves to bring a more steady approach to the music in slowing it down.

As a second album it bears the fruits of a band who are feeling as one with their creative juices and whilst Unrevealed Secrets Of Ruin was no short measure, the music on Death Poems seems to take a step forward. It also takes a step into more progressive territory too as two of the songs stretch out over the ten minute mark and offer plenty of opportunity to stretch out.

Best of these longer songs is the almost beautiful ‘Dissension’, which ends the album. But that’s not to take away from the brute power of opener ‘Your Abyss’, which demonstrates both the anguished vocals of Sylvia and the full force of the band. If anything, it is the vocals which may be the cause of discussion amongst music fans, but as you let them sink into the music, they start to make perfect sense and become another part of the cinematic extreme that is being painted.

In between there is the intense ‘Fall Of Taira’, which coasts along on a chugging riff straight out of doomsville whilst some rather nifty guitar work sparkles through giving the track a dichotomy of sludge and melody. The title track meanwhile, is a much more torpid affair and creeps insidiously out of the speakers with a huge sense of foreboding. It’s utterly magnificent as is all the music on this album.

The Fifth Alliance deserve a huge audience. What they are doing for metal is bringing an extremity mixed with an approachability, which on the surface just doesn’t seem possible. You may need a few listens to appreciate the true power and beauty of what is on offer, but once you are caught in their trap, this band will haunt your dreams forever. Truly exceptional.