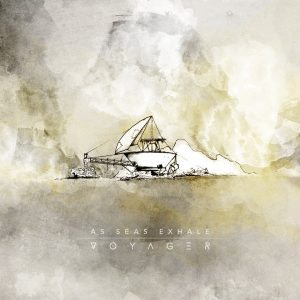 Released on January 8, 2016 via Bandcamp

What does it mean to be human? The past few years have seen film makers, authors, artists and musicians increasingly trying to answer this question as extraplanetary exploration makes examining our place in the universe more exciting – yet terrifying – than ever.

It’s a subject matter that Stephen Craft, the single member of post-rock and ambience project As Seas Exhale, knows intimately. Through his music, he “strives to both narrate the human condition and offer an escape from it”, and his new album Voyager is the latest instalment in this quest.

Over an hour and a half long, Voyager requires a warning label – only open if you’re ready to dedicate yourself to the journey. Casually putting it on in the background may mean you hear some advanced post-rock by numbers. This isn’t necessarily a critique – Stephen himself says “honestly, my goal isn’t to reinvent the wheel with what I write”. If you’re looking for predictability, this record does indeed have the post-rock staples of distortions, crescendos, and climaxes. But tackling Voyager for the first time with anything less than full commitment wouldn’t do it justice.

This is an album best enjoyed when you’re doing something that allows for > self-reflection with no distractions – or doing nothing at all. It’s the story told by these 13 songs, and how they’ve been fitted together, that makes Voyager an interesting work. We’re taken on a journey from the very first track ‘Uncharted’ – a lyrical and light piece – onwards through to third song ‘Marianas’ – full of deeper, thicker layers. By the middle of the album, we’ve reached outer space – the tracks ‘Adrastea’ and ‘Amalthea’ (two of Jupiter’s moons) are ambient yet complex, and we’re left with a strong need for resolution.

We arrive back home by the eleventh track, with the upbeat, heavier ‘Salar (the name of Bolivia’s salt flats). Stephen recognises it’s been a long journey – penultimate song ‘Gefa Me?r Hvi?ld’, which means ‘give me rest’ in Icelandic, is a truly calming yet still contemplative piece. Our travels end with ‘Mare Incontra Il Cielo’ – ‘sea meets sky’ in Italian. It’s a perfect finale – a beautiful blend of melodic sweetness, interspersed with throbbing distortions, and ending with a peaceful fade that would truly be a perfect soundtrack to staring across a body of water into the horizon.

It would be a shame for this album to be tossed aside because the story is lost on a casual first-time listener. If you’re a fan of As Seas Exhale’s previous work, you will enjoy this latest record. Otherwise, wait until you have that hour and a half – the time investment is worth it.