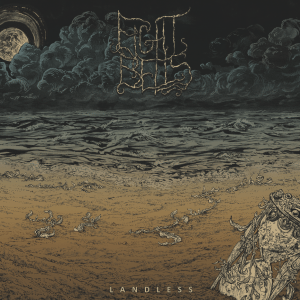 Released on February 12, 2016 via Battleground Records

The music on Landless drifts like an ethereal mist, enveloping you slowly, carrying with it a sense of apathy that is disorientating and occasionally dangerous. The sophomore release from Portland, Oregon-based experimental metal trio Eight Bells, Landless is a concept album that tells the story of a person once lost at sea, returning only to find there is no one to return to. It is a continuation of 2013’s The Captain’s Daughter, an album that showed a band more interested in the avant-garde than attempting to reach a mainstream audience. One might expect this from a band formed out of the dissolution of psychedelic ensemble SubArachnoid Space; joined by ex-band mate Chris Van Huffel on drums and Haley Westerner on the bass, guitarist Melinda Jackson created a sound that was more streamlined and expressive, a trio lending more space to each voice in the group to breath. On Landless, Chris Van Huffel is replaced by Rae Amitay of Immortal Bird, and Eight Bells shrug off the meandering bluesy psychedelia of their début in favour of a sound that is darker, more mature, and more atmospheric, sounding less like a jam and more like a crafted narrative.

Landless begins slowly, almost listlessly, with the song ‘Hating’ describing the engulfing apathy and indifference of hate that has lost its burning passion. The dual vocals of Jackson and Haley glide like spectral voices carried in the wind throughout the album, adopting a drone-like chant in ‘Hating’ that occupies the mid-range and serves to accent the sense of loneliness and inertia.

There is emotion bubbling under the surface that finds a route out in the title track’s short bursts of black metal-like blast beats and screams, but these moments never really make their way to the forefront of your attention; rather, you sense this is the inner hate that has found itself submerged in the coolness of the sea, briefly revealed as the waves sweep back and forth. At almost 13 minutes in length, ‘Landless’ is the longest track on the album and shows the modern progressiveness of Eight Bells’s sound, a post-metal inspired motif launching the song and being returned to in the closing couple of minutes, only after a mid-section of reverb-laden guitar noise, haunting chants, and a growing darkness.

‘Hold My Breath’ picks up this same motif and puts it behind a delay pedal, pushing the album forward with more drive and energy. There is a certain lack of polish to Landless’ production that makes the music sound direct and real, and one can sense the immersion of witnessing a live performance (and I believe this is where Eight Bells would truly shine). The finale ‘Touch Me’ does little to increase the pace, its doomy tempo leaving a numbness of feeling to love and pain, showing that in the absence of these things, one is nothing more than living ghost.

Landless does not leave an impassioned imprint on your memory, but for an album that deals with themes of emptiness and loneliness, accompanied by growing indifference, this is an effect unlikely to be achieved without altering the very feelings the music is trying to impress on you. It’s a contained experience that will quickly fade from your memory, but like the mist its music surrounds you in, it’s worth getting lost in at least once.