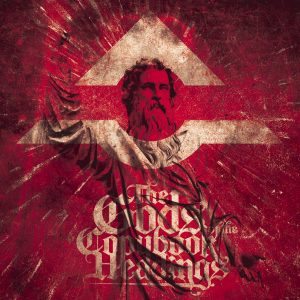 Before I get into this, I must sincerely apologize for neglecting to review the last two releases from Ranges, their ‘Night & Day’ single, which was as equally expansive as it was riveting, and their sublime Bonhoeffer EP, which was a wonderful exploration into sampled audio for them. These two releases have two things in common: They both deserved much more attention, and they are both very successful ventures into new territory as a band.

Ranges’ new album The Gods of the Copybook Headings is once again traversing onto new areas, seeing where they will find themselves. The album itself gets its title from the 1919 poem by Rudyard Kipling, who wrote about how Utopia will never arrive because of our inevitable tendencies as corruptible, easily-swayed, and repetitive creatures. The opening track of the album is a collaboration of many people reciting the poem in its entirety, displayed as whispering voices over a very distant melody and ambient layers of dark and dispiriting ambience.

The album continues with the main theme being the riff you heard behind the poem’s recitation in the opening track. And you’ll hear it in every song, too. It’s not a bad thing, since the melody is catchy, and long. Not some little ditty like a commercial, this lasts for several measures. The melody appears in different forms, to prevent any chance of the melody becoming annoying. It’s actually done very well, I find myself whistling or humming the tune all the time. It reminds me of the redundancy of our nature and the fact that we’re creatures of habit. Extremely fitting for this album’s concept.

My only real complaint about this band is the drummer and bassist, they just feel a little too basic, sometimes. The bassist does an excellent job blending in when he’s supposed to, but when everyone’s going at it, I feel like he’s still trying to blend in, there could be more of an effort made on his end. The drummer is definitely capable, but I feel like it’s a little too elementary, there aren’t enough frills and fills. When the band is blasting away with their wall of sound, he’s throttling his gear like a pro. In the quieter times, I feel like he has no original ideas, he just does the same thing over and over, song after song. In and of itself, this isn’t a very valid complaint, but it says a lot when you have an issue with both the bassist and the drummer, the backbone of any band.

As for the technical side of things, I couldn’t be more pleased. The production quality has skyrocketed in recent months and years, the more you listen to this album, the more there is to find. It’s such an intimate experience, I would highly recommend headphones for this album, or very big speakers. Everything sounds the way it should, everyone is clear, distinct, and blends in with the rest of the band. The band mixes their own material, so it definitely shows maturity in more than one aspect about this band.

I love this album. I love Ranges. I’m afraid to call this the culmination of their talent, because I’m sure they will only get better. Listen to this album, buy their stuff, support them, and give them love. They deserve it. The Gods of the Copybook Headings has easily cinched a place in my top 20 for this year, and they already have me itching for 2017.