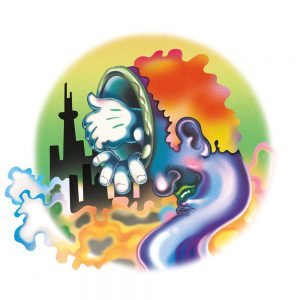 There’s something gloriously retro about Guerilla Toss, they remind me of a hybrid of Bow Wow Wow and Huggy Bear, and that’s probably got a lot to do with Kassie Carlson’s yelping and shrieking No Wave-Riot Grrrl posturing and the swampy, funky, mutated rhythms that the band pump out over the 30-minute or so course of this album.

While these Bostonian lunatics beat you into submission it’s quite easy to see why they’ve picked up quite a loyal following Stateside. I’m not sure they’ve frequented good ol’ Blighty but with each listen I found myself thinking that the best place to experience these songs is in a live environment with a bunch of other people, all as itchy as you are to move, and equally all as unable to stand still.

While the record brims with energy, for me it didn’t quite translate as a listening experience, particularly if you’re sitting around trying to make notes to review the thing, which is why I think the live context for this band, is the best place to hear them – it’s music which must be felt, rather than thought about too much.

Not that Eraser Stargazer isn’t packed with incident or interest – far from it – I loved it’s open-hearted punky changes of pace, time-signatures, and downright funkiness – check out the lead single ‘Diamond Girls’. The keyboards sound like pastiches of cartoon themes, the guitars squall like typhoons and all is tied together by Peter Negroponte’s impressive drumming.

No song hangs around long enough to outstay it’s welcome. Like a bunch of kids knocking back Lucozade each song explodes with barely suppressed relentlessness. The longest track here – ‘Grass Shack’ – almost recalls very early Cardiacs with its change of pace and barely discernible, surreal lyrics, which is high praise indeed. The band also, somewhat surprisingly, name-check The Grateful Dead as a key influence behind this record – I didn’t see it myself, but then I’m shamefully not as familiar with, or well versed in, The Dead as I ought to be. Perhaps you’ll do better.