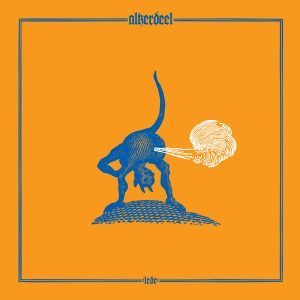 Released on April 15, 2016 via Consouling Sounds

This album starts things off nicely, with the criminally-fun first track, ‘Regardez Ses Yeux I’. The blasts are tempered with slight changes in tempo, and the guitars go from quick chord transitions during tremolo riffing to punk three-chord transitions during slower paces. This is glorious. The vocals are a definite treat, echoing from a canyon in the Himalayas. The vocalist excels mightily here. When Alkerdeel focus on rompous black metal like they do on the first track, they rule with an iron fist.

Second track, ‘Regardez Ses Yeux II’ is a strange foray into spoken word malice. Not being well-versed in the French language, I’m not quite certain what the murmurings mean. Perhaps, it’s evil-sounding, but mysterious. The guitars in the background are interesting and the track only lasts 3:11, so when track three returns us to black metal bliss, Lede takes us back to black metal’s promised land.

Highlight track of the album is title-track, ‘Lede’. The main riff is a stunner, and all riffs that transition from it sound just as stellar. Punk-influenced and powerfully rendered and conceived, ‘Lede’ dusts off this unique take with some trips up the fretboard and occasional tremolo riffs on the higher octaves. The vocals continue to complement the music nicely, and the discordant bass is such a weapon on the album. Blessed be Alkerdeel.

Final track, album closer, ‘Gråt Deleenaf’, starts off with noise in the background. The band seems to like using guitar noise a lot. They sound like very slight guitar shreds working the frets rapidly at low volume. After some time using the noise intro, the band brings back the black metal at a galloping pace. The production is so good for the live kit used on the album, as the hi-hats and snares sound on even keel with the bass drums, never getting smothered by the bass. The final track morphs along different paces, but it mostly gallops along until the conclusion.

Lede is a fine example of the black metal template used with a different approach, and the raw production values still balance-out the instruments to create a very organic bottom-end heavy sound. Alkerdeel have a very good release with Lede, and should continue to expand on this style. I will look forward to their new releases. This is highly recommended for fans to hear the downtuned, bass-heavy production values used for Lede. Echoes and Dust fans, check this out!