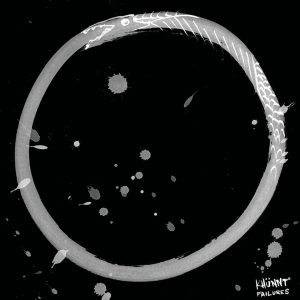 Released on May 6, 2016 via Riot Season Records

Even for those accustomed to the nastier things in life a new offering from Newcastle’s Khünnt is an intimidating prospect. The first thing you notice is the run time: 38 minute run time for one track. You take a deep breath. Then you read the title Failures to yourself a couple of times, rolling the misery over your tongue for a few moments like you were sampling a fine wine. You mentally start to brace yourself. There’s nothing for it: it’s time to black out the windows and reach for the drinks cabinet. If you’re familiar with their work you know where they’re planning to take you. And it’s nowhere nice.

Khünnt have been sporadically unleashing blasts of glacial paced feral noise for a decade now. Their playbook is well established – the barely human shrieks, the drums that hammer like nails into coffins, the elemental guitar cacophony. But on Failures they push things to new extremes. In their blurb label Riot Season mention doom and sludge – on earlier releases like Dead Eyes and Brazen Bull there were elements of both, but now Khünnt’s sound is so far removed from slow handed riffery or mindless Sabbath worship it renders both terms meaningless. They don’t do riffs here – guitars are stripped to their ability to create sonic weight and unsettling noise. It’s more a conjuring than a recital.

In terms of peers you have to look to the likes of The Body, Gnaw Their Tongues and Khanate for similar sounds. Bands that don’t sing about filth and horror; they embody it. Failures plays out like a Wrekmeister Harmonies album after the whole fall from grace thing – they cut to the chase, start from the bottom and stay down there. An incessant muted chime runs from its opening bars through almost the whole of the 38 minute run time, a sound that if you make it the whole way through will haunt your dreams. Every time you hear a ringtone or a mobile alert that sounds a little like it a chill will run down your spine. A single guitar chord is played over and over, the distortion left to hang in the air like some fetid stench. Repetition has been a key element of their attack and on Failures they take it to fanatical levels. It can be used to conjure so many emotions and mental states from the listener but for Khünnt it only ever serves one of two purposes: to signify threat or unspeakable sadness. I’m not sure which is more unbearable.

Otherworldly guitar noise that sounds like it’s crossed over from a Haikai No Ku record drifts menacingly in and out. It reaches almost unbearable levels of tension over 10 long minutes before everything drops out and the vocals kick in, sounding like some grotesque creature is being birthed out through a man’s throat. Then things get truly harrowing. And so it goes for the next 20 minutes, at the same pace, with those same chords dropping like anchors and that same god damn chime ringing out. There are a couple of moments where the song disintegrates into freakouts that sound like psych rock on some terrible comedown. And you think the nightmare might be eneding. But it isn’t. A couple of times that chime resumes, grinding away at your consciousness. Then the last section arrives, all wild feedback and the sounds of a guitar being turned inside out over tribal drumming. The bile spills forth, even more intense, even more depraved. It’s viscous, exquisite torture.

I can’t in all good conscience recommend Failures to anyone. What kind of person would that make me? It’s nigh on 40 minutes of sonic debasement, of aural punishment the likes of which interrogators at the most remote no-holds-barred extraordinary rendition centre would balk at playing to their detainees/victims. But I will say this – it’s the best thing Khünnt have put to tape yet. They’ve taken a step back, given themselves more room to breathe rather than burying their work in more traditional guitar assault. In doing so they’ve created something that much more focused and unsettling. With a 10 year retrospective coming out soon there’s a sense that Khünnt are entering a new phase in their evolution. If that’s the case, and they continue going down this road and getting better at it, then god help us all.