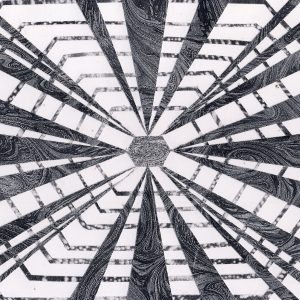 I chose to listen to this split while I was at work to encourage concentration. Drone and ambient music are essential for those moments when my boss is about to find out I’m behind because I spent an hour on Buzzfeed (because I NEED to see the weirdest Airbnbs in Prague). My intentions backfired when I entered into one of the more exquisite zone out sessions I’ve had. Oaken Palace Records has put out a split that definitely transports you. The fact that the label is committed to donating proceeds to environmental causes drew me in. The result is a conscious project that works impressively well within that theme.

Hellvete’s portion of the album rumbles from meek beginnings as a beam of sound slowly radiates throughout the 11 minute track ‘Bessenfeest’. On a steady incline new layers surface adding a gentle fuzz under the swirling drone. Right at the end of the track a glimmer of synth trickles in then cuts out, adding an element of awareness to my listening. The drone carries on with a slow pulsing soft drum into ‘Buiten het Droomharmonium’. A faraway tone is reminiscent of minimal home recordings which I loved. The fuzz waxes and wanes into Bear Bone, Lay Low’s half of the split.

Bear Bones, Lay Low undoubtedly differs in style, but fits perfectly on this split. Hellvete is the soundtrack to the journey and Bear Bone, Lay Low’s contribution is the destination. An organic and wild forest of music with psychedelic synth that dances around almost maniacally. The 20+ minute track ‘Prism Leaf Chasm’ just sounds, alive. One moment, flutey musings in the background, another a steady airplane roar and the next almost screeching blips over a mellow tribal drum beat. The end of the track fades with echoing indecipherable voices and trilly space sounds that send you back.

Proceeds from album sales go to help rescue the Radiated Tortoise from extinction. Look up a picture and gaze into its kaleidoscope shell while you listen to this.