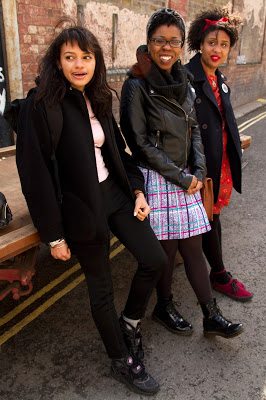 London based Big Joanie were formed in 2013 and is composed of Chardine Taylor-Stone on drums/vox, Kiera Coward-Deyell on bass/vox and Stephanie Phillips on guitar/vox. Citing influences as diverse as X-Ray Spex, Nirvana and Jesus and Mary Chain they describe themselves as sounding like ‘The Ronettes filtered through 80s DIY and riot grrrl with a sprinkling of dashikis'(1)!  With a new single ‘Crooked Room’ ( inspired by Melissa Harris Perry) recently released, following up their 2014 EP Sistah Punk which included the excellent ‘Dream No 9’, I contacted Steph for an interview.

(((o))): I first came across you on Not Right’s list of UK Riot Grrrl bands where you’re described as ‘black feminist sistah punk’ (2). Had any of you collaborated before or played in other bands?

Steph: We hadn’t collaborated before. We met when I put up a message on Facebook asking if anyone wanted to start a black punk band. Chardine and Kiera hadn’t played in other bands before. I previously was the guitarist in the feminist punk band My Therapist Says Hot Damn.

(((o))): Obviously the band is driven by a strong politics, how did that politics take shape, what were the influences?

Steph: We have a lot of varying influences. I can’t speak for the whole band but I felt quite at odds with the punk scene and the way it tackled race and racism. We formed to make a little safe space for us as black women to create. At the same time by creating and performing we hope to influence other black people that punk is a great place to find yourself and be creative. We’re influenced by everyone from New Bloods to Sister Rosetta Tharpe and bell hooks to Melissa Harris Perry.

(((o))): In an interview with badhousekeeping.com you align yourself with an 80s DIY ethos (3) that was also such an empowering aspect of early punk, the idea that everyone can make music. The dismantling of hierarchy seems to be in the DNA of Big Joanie!   How would you more fully describe your music?

Steph: As I mentioned earlier Big Joanie’s ethos is to create and inspire in a way. We want more young black people, especially young black women, to use punk and more alternative creative routes as a way to express themselves.

(((o))): What sort of subjects do you engage with lyrically?

Steph: We don’t particularly have any subjects that we tackle as most of our lyrics are written off the top of my head with no real meaning. A few songs are about love or the concept of love. We have one song that will be on our new single called ‘Crooked Room’ and it’s inspired by a Melissa Harris Perry quote where she compares black women’s struggles negotiating this racist, hetronormative, misogynistic society to trying to find your vertical in a room where everything is crooked.

(((o))): Simone De Beauvoir commented ‘One is not born, but rather becomes, a woman’ (4) and in the book ‘One Chord Wonders’ Laing comments that first wave punk created space for women to deconstruct and explore gender (5).  How do you experience the ‘punk scene’-has it continued to be a space to explore gendered/non-gendered identities?

Steph:  I think in terms of gender the DIY scene has been incredibly supportive and its rare to see a band without a woman or that isn’t female focused. I do feel we in the DIY scene are a bit sheltered from the outside world and how women who involved in other genres experience misogyny, which is both a good and a bad thing I suppose.

(((o))): Originally Riot Grrrl was a reaction to the US punk scene being predominantly straight white male, with all the attendant problems that brings. How have you experienced the UK punk scene, is it an easy space to be a (black) women?

Steph: The DIY scene is incredibly supportive but it is majority white and that is rarely questioned. Before I started Big Joanie I found that I would have to separate out different parts of myself and have my feminist punk hat on when I was at gigs in the DIY scene and my black feminist hat on when I was at black feminist events or with my friends. Now its so much easier to be able to combine those identities in Big Joanie and not have them clash in any way. There are still issues when it comes to being a black woman in an overwhelming white scene. We’ve seen a lot of cultural appropriation and still have trouble figuring out what to do when we’re playing to majority white audiences but that is slowly changing. At every gig there is always at least one person of colour and there seem to be more people of colour at our gigs the more we play.

(((o))): You have been together about two and a half years and played live within six months of forming (1)! How have you found playing live? Is that where your music finds its fullest expression or do you prefer writing and recording?

Steph: I’m not sure. I think we like to play live as it’s always different every time. Even if we think we played a bad gig someone will always come up to us afterwards and thank us for playing so it is quite reaffirming.

(((o))): Feminism includes the concept of intersectionality-that women’s experience is affected by class, ethnicity and sexuality. Is that why you describe yourself as black feminists because you are conscious of the diversity of female experience or because black women in particular need a higher profile in DIY/punk?

Steph: I suppose both reasons. We realised that there are black women in bands that are feminists but they rarely declare their identity in such a way. We wanted to make sure other black people knew we were here. We’re proud of our identities and want to make sure other people know exactly what we’re about.

(((o))): If we construct ourselves from the cultural resources available to us, what resources and role models have you drawn on to resist a patriarchal, sexist society?

Steph: I guess bell hooks is always a good one. I love Sister Rosetta Tharpe as not only was she a queer black woman playing guitar in the 20s she also practically invented rock n roll as we know it today.

(((o))): Who are you currently listening to and reading?

Big thanks to Steph for her time and answers.