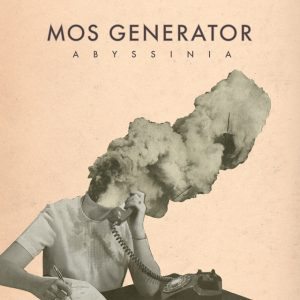 Released on July 15, 2016 via Listenable Records

Tony Reed, main man in Mos Generator, is the keeper of the flame of hard rocks heart. Everything he produces has an unstated ‘quality assured’ stamp, every album is a labour of love, celebrating the greats of the hard rock genre without ever resorting to posturing or mimicry. He is the real deal, and even when the rest of the line-up changes, as it has here on Abyssinia, there is no drop in standards or wavering in dedication to the cause.

You may only have heard of Reed through the media interest his Lost Chronicles of Heavy Rock Vol. 1 generated last year, where he released for free a selection of the hundreds of classic cover versions he has lovingly re-recorded, note for note, in his home studio. Reed is a scholar and a crate digger supreme but what he brings to his own recorded output is a warmth, class and easy charm that shines through on every track.

I have seen Mos Generator described, quite lazily, in the past as both a doom metal and stoner rock band, but they take their influences from a much wider spectrum, as you might expect from a band who hark back to the days when there was only two variants of rock; hard or progressive. They can certainly do doom, as on the viciously bleak ‘There’s No Return From Nowhere’, but the assault is leavened by a softer middle passage which features a synth break that calls to mind ‘Going Mobile’ by The Who.

Stoner rock is obviously not out of the reach either, although the cavalry charge of ‘Red Canyons’  is as much classic NWOBHM as Monster Magnet. Whatever styles the band turn their hands towards it is all magnificently delivered, and the new rhythm section excel themselves throughout, especially new sticksman Jon Garrett on the war drums of ‘You’ve Got A Right’ and then there’s bassist Sean Booth’s sinuous work on ‘Catspaw’.

Two highlights of the album sit at the end; first with the King Crimson-esque, skittish time signatures of ‘Time and Other Thieves’ married to sublime Scott Gorham style soloing from Reed, and then closing with the wide-eyed ‘Outlander’, unhitching the band from the firmament and taking you with them into a 1970’s space epic. Both are sublime.

If you love hard rock then you love Mos Generator, you just may not know it yet. Tony Reed and his new band mates have produced another set of tunes to cherish, whilst furiously playing air guitar…