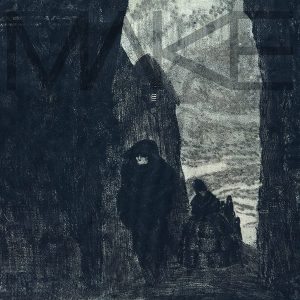 It’s hard to know how to react to the state of things today. On this side of the pond, faced with Team Brexit celebrating victory in their foolhardy crusade to separate us from our European brothers and sisters with no plan as to what comes next, and with our new unelected Prime Minister hand picking a cabinet of liars and hucksters whilst the so-called opposition is too busy continually punching itself in its collective face to do any opposing, I’ve been mostly coping by drinking too much and eating crisps in darkened rooms. Over in the US post-metallers MAKE have an even more apocalyptic political environment to deal with; police officers caught on film shooting and killing African Americans without consequence on a seemingly daily basis, right wing commentators seemingly happy to try and stoke a full fledged race war and the harrowing prospect of a Trump administration casting a shadow across the country. No one would blame them for aping my duck-and-eat-junk-food response.

They’re clearly made of sterner stuff though, using these troubling as fuel for a flurry of productivity. Pilgrimage of Loathing comes only a year on from their last album The Golden Veil, but the tone couldn’t be more different, with the contemplative, slow unravelling of that record switched for seething rage and defiance. Of course righteous fury is one thing and righteous tunes are another – thankfully MAKE have both in their arsenal. Opener ‘The Somnambulist’ comes on like a slow motion tidal wave, all molasses thick riffs crested with ragged, desperate vocals. About 7 minutes in the song disintegrates into noise whilst incensed invective is delivered with a black metal rawness that comes straight from that space between abject hopelessness and white knuckle resolve. The song reconstructs itself around hollers of, “YOU…YOU WERE WRONG.” It’s blunt, unsophisticated even, but it feels like exactly the right response to the environment MAKE find themselves in.

Because as well as the world-on-fire nightmare scenario we’re all facing MAKE have got more local concerns to contend with; their infamous Governor, Pat McCrory, gets his own tribute, lovingly titled ‘Human Garbage’+. This was apparently written before he signed the anti-trans rights Public Facilities Privacy & Security Act, which forces residents of North Carolina to use the restroom that corresponds with their birth certificate rather than their gender identity. I dread to think what they’d have called him if they’d have penned it after that. Whilst not exactly hectic ‘Human Garbage’ finds them playing at a faster pace, somewhere close to Remission era Mastodon territory, with choppy riffs and suitably embittered vocals are delivered in a satisfyingly feral fury.

The pace of that attack is the exception rather than the rule. The rest of the record is played at more traditional Neurosis/Isis pace, with occasional forays into straight up doom territory and the odd flirtation with atmospheric black metal. Their regular approach is probably best illustrated in the way they drag ‘Dirt’, a cover of The Stooges song, into their realm. The feral blues strut of the original is twisted into a weather beaten sludgey dirge. Iggy Pop’s dive bar nihilism is replaced with throat rending screams which sound beyond despondent. It’s a fairly straight cover in structure, though the originals wailing solo is muted into something more muted and atonal, which feels appropriate – post-metal isn’t really the right playground for a full on facemelter. The Stooges made sounding broken and doomed sound sexy – this is entirely sexless and desolate. A fitting sign o’ the times perhaps.

It’s not all rage and ruin however. ‘Two Hawks Fucking’ may not sound like the title for a chilled out interlude, but that’s what it is; all echoing drums, shimmering delayed guitars and sombre keys. Out of context it might just sound somewhat sad but rather pleasant – amidst such anger it sounds utterly crestfallen. A few BPM lower and I’d be tempted to call it doomjazz. It’s a strange inclusion – Pilgrimage of Loathing was reportedly initially intended to be an EP when MAKE began recording and with the tonal shifts it has the slight disjointed feel of a recording session that went long.

But it hangs together well enough, the strength of the parts making for a satisfying whole. They say desperate times often make for excellent artistic responses. I doubt MAKE will be too offended when I say that as good their response is it’s not much of a silver lining in the grand scheme of things. But on its own terms it’s the most cathartic post-metal record I’ve heard in years, red in tooth and claw, and a stride forward from a band becoming more impressive with each release.