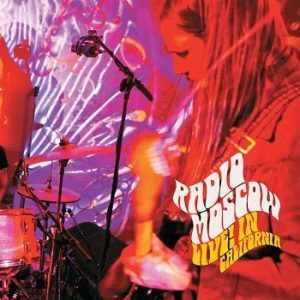 It must have been one hot night in California when San Diego heavy psych veterans Radio Moscow rolled into town. Full of smoking riffs and barking vocals, the years since Hendrix last laid waste to Monterey were rolled back and the spirit of ‘69 was set free once again. Now, in a no holds barred set fully recorded live with no overdubs, we get to relive that heady night at The Satellite Club in 2015 all over again.

And what a night to relive. Doyens of a scene built largely on an underground following, Radio Moscow have become something of a kingpin amongst their peers. They also channel into that seam of playing where a song may be completely rearranged by the time they have finished with it. The studio albums become platforms from which they can launch their explorations, much like the classic jamming bands of the 60’s/70’s and bring an unpredictability to the live show.

That shows throughout here, and whilst the album was recorded completely live, it’s quite remarkable how good it does sound. Yes there are bound to be mistakes, although with a free ranging blues spirit, you are never quite sure if they mean it. Led by the guitar and vocals of Parker Griggs, who at times comes at you like a crazed shaman, and backed amply by Anthony Meier (bass) and Paul Marrone (drums) the music reaches lysergic levels not seen in LA since probably ’72 when The Dead rolled round.

Everything you need is here from the barnstorming opening of ‘I Just Don’t Know’, the slow blues of ‘250 Miles Brain Cycles’ and even a cover of Saint Anthony’s Fyre’ ‘Chance Of Fate’. It’s not the songs themselves though but the sheer energy and abandonment in which they are delivered. It’s a flashpoint in time captured in one molten record, the likes you rarely see these days.

If you want to find out what is stirring in the heavy psych underground these days then you can’t go far wrong with this record. It’s a supreme live document of a band who are simply on fire at the moment and along with Earthless and Harsh Toke, are revitalising the heady days of the 60’s through their expressive jamming and explosive blues. It is also a stark reminder of how exciting a live album can be and for that alone needs to be heard. A great document of a great night from a great band. Simply great.