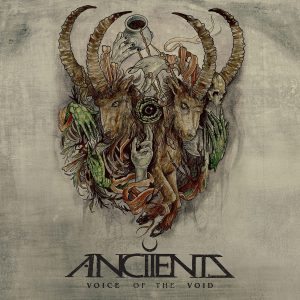 I have a confession to make; I have been pretty bored with heavy metal this year. Maybe even for the past couple of years. Really good metal albums are/were sparse and the new music that was coming out was bland and in most cases a retread of what we have been hearing for years, if not decades. It was getting to the point that I had almost given up on new metal and resorted to a constant shuffle and repeat of classic metal when the new Anciients album Voice of the Void was placed ever so gently into my inbox. Without giving everything away in the first paragraph, Voice of the Void has shown me that there really is a future in true, confident, solid, eclectic heavy metal! Wow! I thought their first album Heart of Oak was great; Voice of the Void takes what that debut album was, which was superb, and built and grew and expanded to places I didn’t even know existed in heavy metal!

I have known that Anciients are a talented band because of their debut album, but what they have done over the past few years to get to where they are now is a credit to their dedication to their craft. They have combined so many different genres of heavy metal so seamlessly that the accessibility of it is amazing and to be honest would normally seem almost impossible. There is so much going on in each song that one would think that making it flow would be a challenge, but Anciients makes it seem like anybody could pick up an instrument and play these songs. Each transition seems so effortless and cohesive that one wonders how this band is not bigger in heavy metal. It is interesting because you could try to pinpoint their influences from these songs and I’m sure there are many, but the great thing about this album is influences or not Anciients have created an album that’s their’s alone!

The album opens with ‘Following the Voice’ an almost seven minute epic that has a mid-tempo start and slowly builds into a growl that lets you know what to be expecting from this album. One of the things that Anciients does almost better than most bands is their ability to transition from haunting clean vocals to a demonic growl without either sounding out of place or forced. This is completely evident on the opening song and it is done so well that it just feeds into the likeability of the rest of the album.

This is a very hard album to review because each of the songs on this album are excellent and deserve their own mention, but time (or space) doesn’t allow for that so I will tell you that besides the spectacular opener two other songs really peaked my fancy ‘Buried in the Sand’ and ‘Ibex Eye’. The former the second song on the album starts off with a punch in the face growling vocals that will literally make your heart jump if you’re not expecting them. In come the clean vocals and the main groove of the song. The song flows back and forth between the vocals telling the story of the song and the power of what is going on becomes clear at about the midway break. The songs slows but builds, on the anticipation of what’s to come and in what form it will show itself. ‘Buried in the Sand’ is almost eleven minutes long, but so much happens during the song that when it ends you are still aching for more. Again and luckily, that is only the second song on the album!

‘Ibex Eye’, another epic song at almost ten minutes, is the epitome of what this band can do and a credit to how in synch and cohesive they are as a band. This song takes the twists and turns into a whole new dimension, but does so seemingly effortlessly. Once again there is a lot going on in this song but Anciients make it work and make it extraordinarily enjoyable to be immersed in their world.

As I said earlier, my faith in heavy metal was diminishing and I was having doubts that my favorite music would never find its path forward until I heard Voice of the Void! Anciients has restored my faith in heavy metal once again. From the pummeling rhythms to the power that this band of four can create into epic songs, a band this talented just may save heavy metal as we know it today. Let’s hope other bands can learn from what Anciients have done with this album!