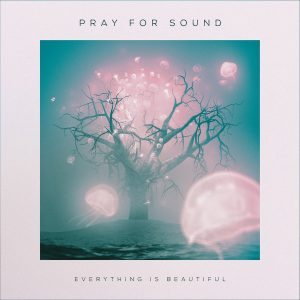 Pray For Sound’s latest album Everything is Beautiful, which was released September 23rd via AMFM records, IAMSHARK records, and via Dunk! across the pond, is by far one of the best albums I’ve heard all year.

At first glance, the cover looks painfully post-rock. Floaty, twinkly, wholly atmospheric with not a whole lot of substance. It’s every post-rock connoisseur’s nightmare. But if you look a bit longer, you’ll notice that the tree is dead, and the surroundings are giving it the appearance of life. It really is a gorgeous beginning to this album. And by all means, feel free to judge this book by its cover. You’ll still be impressed.

The first two tracks, ‘The Ringing in Your Ears’ and ‘Once One Begins, There Are Only Endings’ gracefully lay the foundation for the first half of the album, with a slow-building atmosphere that rewards a patient listener with subtle riffs and layers of beautiful music laced with acoustic melodies. Acoustic guitars is something I always want to see more of in genres like these, it gives it a naturalistic sort of feeling.

The feeling continues until halfway through the album, and the mood ineffably shifts. It becomes…. hopeful, for lack of a better word. It’s lighter without becoming twinkly. It’s brighter without being unbearably cheery. Even the song titles sound happier.

The dichotomy within this album is impossible to deny, the change in mood halfway through the album can’t be anything but deliberate. The first half of the album is like the feeling of going through a terrible chapter in your life, and the second half is like waking up one day and realizing you’ve made it through the storm and your life is headed towards greater challenges, a brighter future. It’s astoundingly insightful, which is a rare quality for music these days.

The first 5 songs are chapter one, the nest 5 are chapter two, and the last song is like the epilogue. This conclusion to the album is a brilliant finish to an equally brilliant album, and confirms the feeling of the fact that there is a story being told here. It’s like your life isn’t what you want it to be, you’re dead like the tree. But your life is what you make it to be, it’s your perspective, and you can change it and come alive in your situation.

The more I listen to this album, the better it gets. The first time I listened to “Everything is Beautiful” I didn’t have a clue about the dichotomy, the story, the emotions, or any other bullshit I spouted just now. But nevertheless, it was remarkable. Every time I swim through the sounds, I dive a bit deeper, and I am always rewarded for my efforts.

As for the technical side of things, I have virtually no complaints. The recording quality is superb, the instrumentation is awesome, my only problem is the drums on track two always get me thinking they’re going to go a more exciting direction, it’s a tad misleading. Other than that miniscule issue, I seriously can’t find anything wrong with this album whatsoever.

Pray For Sound established themselves in an incredibly firm fashion after the release of their last album, Dreamer. After Everything is Beautiful, I am positive that they will cement themselves as giants of the genre.