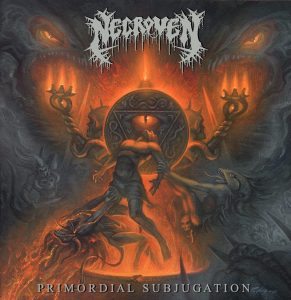 Necroven are back with a full-length album, care of Memento Mori Productions. Dark death metal is, in spite of having a presence in the underground, vastly overlooked by a majority of metal fans. Melodic death metal continues to sail through the airwaves with greater frequency, as dark death metal is after all, more often a kvlt phenomenon than a major label marketing gimmick. Enter Necroven’s Primordial Subjugation, and Memento Mori, a label specializing in death metal, has brought this sub-genre some much-needed cardio-pulmonary resuscitation with the release of the band’s new album.

Memento Mori Productions has been releasing a litany of quality records since the label’s inception, and fans of old-school death metal and dark death metal would be wise to visit their webshop. They too are vastly overlooked and the support from fans will be appreciated by purists who wish to keep music like Necroven’s, alive.

Not simply a band keen on the blast and stop technique, Necroven rage through blastbeats, double-kicked segments, all while the guitars morph in riffs that transition perfectly from one to the next. Songwriting chops aren’t always a particular quality that extreme metal bands demonstrate aptly, and many of those bands simply execute one main riff and transition to a second riff without much variation. Necroven showcase a dearth of quality riffs that move freely from one series of riffs to the next, varying the tempos with a regard for nuance. Primordial Subjugation is accessible instead of obscure, cavernous instead of atmospheric, all while maintaining the essence of the true dark death metal style.

Dark death metal isn’t gore-caked, nor is it chugging riff-dominated or punk-influenced. The style goes back to the roots of death metal practiced by a small group of bands, like Incantation and Infester, and has seen a resurgence courtesy of bands that rekindle a love for ritual worship. In a pantheon of underground bands that most fans only see in some of metal’s best distros, Necroven has been releasing similar–sounding records that slay with aplomb. Like a silent assassin, Necroven have lurked in the underground far too long, and in spite of that fact, love it there where bands writhe in the muck where no light can shine.

Necroven beg to be heard though, for and by fans that care about music without trends or hype. This premiere is a testament to underground purists who still champion bands too dark and ancient in their approach to writing death metal, so check our exclusive stream and spread the word like it were chlamydia to the ears.

No need for quasi-Satanic ideology getting in the way of one’s appreciation for good music. The body is fundamentally a flawed principle of organization. Life ends and all living tissue march to inevitable degradation. Necroven remind me of a time in metal when death metal focused on music instead of vernacular, when riffs were downtuned to profound depths, and music was still an experience more than a marketing ploy.

Necroven don’t fiddle with anarchic lyrics too juvenile to be taken seriously by intelligent metal fans. This is not a party. This is an experience that comes close to none. Therefore, play Primordial Subjugation with reverence to darkness, or the body’s inevitable decline. Dark death metal music spreads like the void devouring the light. That which cannot be seen cannot be discounted. From Echoes and Dust, to you – intelligent metal fan, the baton is passed. Support Necroven. Support Memento Mori Productions.