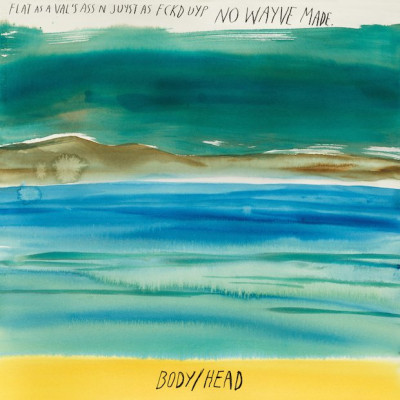 No Waves by Body/Head

Kim Gordon and Bill Nace, as Body/Head, return with No Waves, a live document recorded in March 2014 in Knoxville, Tennessee, part of their tour for 2013’s Coming Apart. As an improvising duo, Gordon and Nace re-present three pieces from that album here, and question notions of the hierarchy between live set and studio work, preferring to see them as unique ‘moments’, with their own energies and alchemy.

Gordon has explained that, for her, when improvising, “Your body almost takes over – in an intuitive way… I try not to be in my head…”, giving another spin on the band’s name. They don’t stick to pre-ordained developments in their live improvisations, although this set is mostly, if loosely, based on tracks from Coming Apart. Nace explains that they “occasionally will have a way we want to start a set, and we’ll discuss that, but it’s pretty loose—just kind of a signpost—and it’s meant to fall away pretty quickly.” You can feel this process throughout the record, different segments increase in intensity, come to a head, usually aided by Kim switching up the emotional power in her voice, then ebb away, the elements becoming more scattered and disconnected.

Although the title No Waves is partly a reference to the No Wave moment in New York from which Sonic Youth emerged, it’s clearly another tongue-in-cheek move. Body/Head is sufficiently its own animal to withstand reference to the noise-rock deities themselves. It’s another playful title that Gordon is so drawn to, which seems almost flat and prosaic at first, but opens up with ambiguities (also Girl in a Band, Gordon’s memoir of her time in Sonic Youth). Waves are choppy, they disrupt, they erode, so the absence of waves (No Waves) should offer calmness and serenity unthreatened, right? The cover art (from Raymond Pettibon, whose artwork was lifted for the Goo cover) seems to depict actual, watery waves, however placid and barely rippling, more of a slowly undulating sheen than the storm-brewed tsunamis you may picture when this music is in full flow.

“Sugar Water” begins with some quite pretty guitar figures plucked out, almost identifying as something from the Sonic Youth-inspired milieu of indie/noise rock. It soon turns itself inside-out, with a bewildering variety of textures deployed over the eight minutes of the song. A couple of SY-esque trebly riffs are chucked out over washes of throbbing feedback, with Kim’s vocal displaying a searching, questioning quality, giving a haunting feel to the opening tune.

“The Show is Over” moves into metallic, industrial tones, with the guitars grinding and scraping one minute, then squealing like a sax the next A harmonica appears. At first, though, as Nace and Gordon have just covered such a spectrum of textures you assume it’s yet another new sound one or the other has wrangled out of their instrument spontaneously. Just as suddenly, the landscape changes again, with slowly ebbing feedback colouring the background as Kim repeats a gradually distorting phrase, with another mic perhaps being tapped or knocked to create an off-kilter pitter-patter as Nace then builds up the guitar weight to wring the last drops of intensity out of the piece. Cruelly, it ends abruptly, and you wonder where else this amazing duo can go.

The final track, “Abstract Actress”, is 23 minutes long, giving you plenty to explore. An abstract actress sounds like an interesting concept in itself, maybe even nodding towards Kim’s experience of being an artist in the public eye and a Girl in a Band, but is in fact two pieces from Coming Apart loosely intertwined. Rhythm is used to great effect here, with low scuffed up guitar noise propelling one segment forward until it gradually comes apart and shatters into several directions at once. It has been noted that Body/Head evoke a certain organic quality in how the tones and textures develop. A single noise repeats, then takes on new attributes and starts to sound like two or three separate instruments, the whole piece of music then pivots around it for a time, then it collapses in on itself, lending several new sounds room to grow and feed off each other once more. In “Abstract Actress” Kim also includes a few lines from Nirvana’s ‘Aneurysm’, “beat me out me…”, “come on over and do the twist…”, “love her so much it makes me sick”, which can only have been extremely heavy to hear live, given Kim’s closeness to Kurt Cobain (again, in her great book Girl in a Band). Indeed, it is Kim’s use of her voice on this record which really makes it such a stand-out. Wailing like a detuned guitar or murmuring with intent, she stretches and forces her voice into all manner of shapes and textures. This coupled with the pair’s epic sculptures of guitar violence gives No Waves its undeniable power.