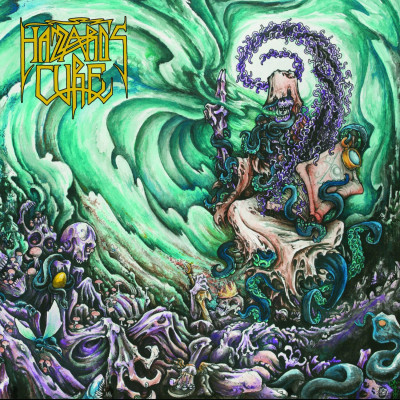 When a band bio page lists their interests as being loud and fucked up, you have to wonder whether they are going to deliver music on a mature enough level to make it through an album. Hazzard’s Cure have no worries on this score though, and their second album Smoke Iron Plunder carries on their tradition of Bay Area speed doom on to the next level, so to speak. Here is the sound of a band really getting to grips with what they are about and enjoying the music they are creating.

On a heaviness scale of 1 to 10, Hazzard’s Cure are easily hitting a 9 yet temper that with moments of levity where they shift tempos from full on riffs to bass heavy slow doom passages. Not afraid to hit the thrash button either, this can happen a multitude of times during one song. ‘An Offering’ is a prime example of this ease in which they play around with the heaviness. Before you start thinking this may be prog though, be aware that the band are more in tune with the more cynical side of thrash mixed with a huge dollop of rock and roll anger.

There are little progressive flourishes, but the true intent of the band is in the full on metal of ‘Hewn In Sunder’, which pummels along at a breathtaking pace whilst still managing to find time to throw in a few melodies. It’s invigorating and alive, and shows that the Bay Area still has a lot to give when it comes to metal. On the other side of the dice, they do dumbed down sludge too, which plays off well against the more intelligent moments.

Hazzard’s Cure deserve all the plaudits they get and sound like a band who should be leading the charge on a new heavy metal sound. All around bands are getting slower and heavier whilst these speed things up to provide much needed balance. Speed doom may be a minute sub-genre at the moment, but given the right set of circumstances could take over from the mainstream American metal that is being peddled about. The scene needs a band like this to kick it up the ass and just maybe Hazzard’s Cure will be the ones to do it.