(((O))) Live: MARCH OF THE PIGS: TOUGH TITS, LOWER SLAUGHTER AND PIGS x 7 AT THE LEXINGTON 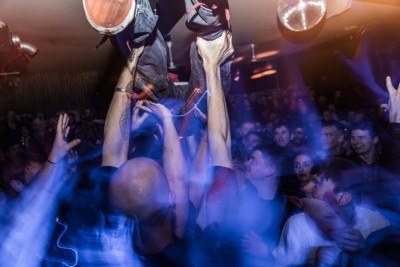 I was a tesla coil standing in the centre of a plasma globe and everything was fucking madness. In a siege of punks and vagabonds, first time gig-goers and the night-after-protest activists, I was as lost as anyone and with the burdening frustration dawning on us all, it made sense that we would amass at the epicentre of chaos and release; Pigs, Pigs, Pigs, Pigs, Pigs, Pigs, Pigs at The Lexington. 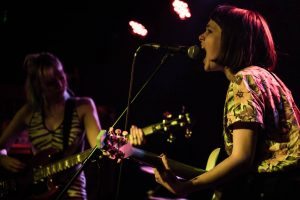 Tough Tits opened the show with razor-toothed sloganeering and surprising formidability; the group themselves seem shy and calm yet, their music is bold and in-your-face with each instrument charging through the speakers like a rally. The drumming really stood out for me in the live setting; the intensity of it felt like it was anchoring the performance and as a result, I felt like I got a better understanding of how it plays into the songwriting for the band but, also it sounded fucking heavy. And I liked it. Do check out the review I did for the new double A-Side for this most noble of publications on my author page and follow up all of the bands after reading. 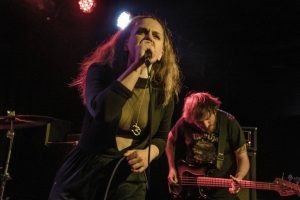 Speaking of intensity…Having never heard Lower Slaughter before, I was captivated by their awesome frontlady’s powerful vocals, presence and accent. It’s great to see that in the underground music scene feminism is not some token marketing ploy and that the resistance is a flourishing movement. However, it is fucking depressing that the underground’s successes always take so long to feed into the mainstream and barely ever do. I saw 5 bands over two days and four of them were fronted by women and the women weren’t objectified or disparaged or belittled, they were empowered; they were impressive and in the case of Oathbreaker they were fucking awe-inspiring. I don’t remember much about Lower Slaughter’s music other than that I enjoyed it but the fact of the matter was that I was just really glad to see another band where a woman seemed to actually have her own voice rather than being crammed into some shitty role like life is some worthless, fucking pantomime.

INTERMISSION:
At this point, I went off for a stroll with Cosmic Collins who I’m pleased to say, I was extremely pleased to meet for the first time and if that wasn’t enough I also found Chaos Theory aka Kunal Singhal in the maelstrom that night as well (I had similarly bumped into him in the madness at Oathbreaker the night before), so it was a great night for our quaint scene for critics and promoters to gawp, ramble and surrender their melted hog jowls to the bands. 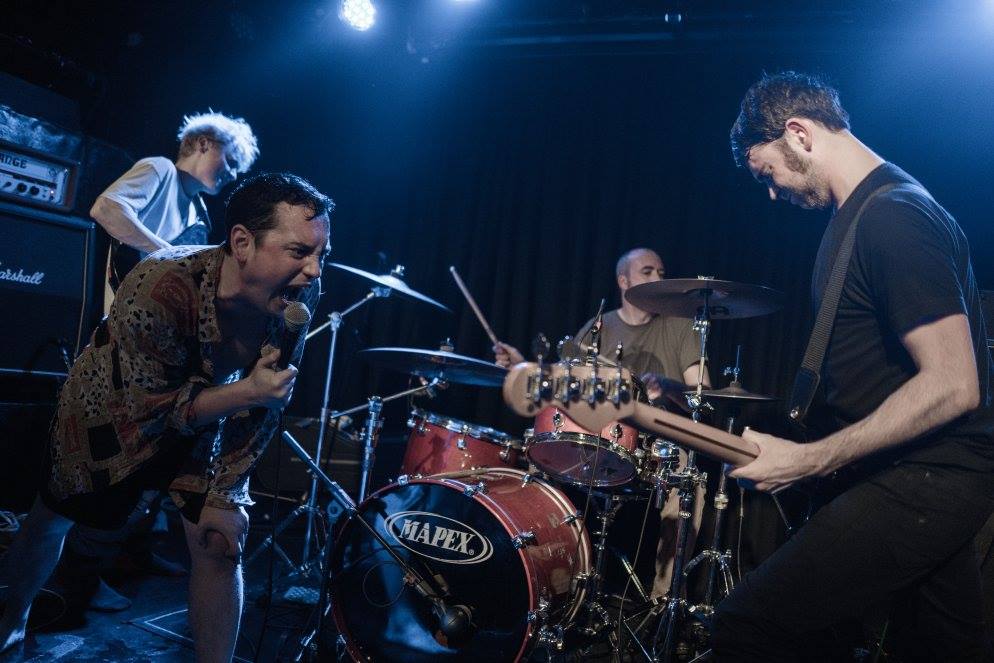 Pigs descended onto the stage to a swarming audience that even I found fairly difficult to manoeuvre through. The band looked like they were two days drinking into what was supposed to be an afternoon barbecue. They collectively radiate a palpable post-90s cynicism that permeates through all culture today one way or another; the idea is simple, the game is rigged why even try? I always like to say “life is great, nothing matters” but, the brutal irony of that is that it feels like it does and just like the Trump voters and the protesters and the Brexiters, I fling my shit at the wall and say “fuck, everything, fuck everyone, it’s all a joke and it doesn’t matter.” Some of us are flying towards moralistic hedonism and optimistic nihilism but unfortunately, the message is lost elsewhere. Pigs x7 are the embodiment of this idea; they don’t take it all too seriously but of course they do, listen to that music; that’s the sound of ideals shattering to the point where you have to laugh or cry and end up doing both hysterically. It’s like a middle finger to everything; a simple way of telling people you don’t give a fuck but really you made that gesture to symbolise that because you were emotionally motivated to do so. ‘Psychopomp’ to me is a great example of this, when I saw the band performing this live, particularly Matthew Baty’s theatrical performance it seemed to gain a new level of irony to me; his unchained performance was like a mockery of the pretentiousness of some frontmen whilst simultaneously being vastly better than most frontmen. It’s like watching Charlie Chaplin or Andy Kaufman, the seriousness delivered with comedy, the laughter masking the rage and both sides equally valid and delivered like seeing a knife from all angles of the blade.

It’s funny, how reflection changes your perspective and refines moments into thoughts and feelings into words; I started this review at the gig lost in a haze of intoxication and awe thinking only three words “what the fuuuuuuuuuck!?” It’s rare that a gig completely blows my fucking mind, the gigs that come to mind are the first time I saw HEALTH, the last time I saw HEALTH, the first time I went to ArcTanGent and Gnod at The Buyers Club in Liverpool as well as the time I was snuck into All Tomorrow’s Parties by older Murray, before I turned eighteen; Shellac fucking killed it. I’ve been to other good gigs but these are the ones that live in a special place in my heart. Pigs burrowed their lofty trotters into my heart with that aforementioned drove of bands on the 21st. It was a fucking unreal experience. Each member of the band is a fucking excellent artist and musician and their other contributions to the scene are equally brilliant. The band without Baty’s vocal would instrumentally be equal to any doom/stoner/post-Sabbath metal band but with him their presence is something truly extraordinary. A band that chooses to have a vocalist needs to choose someone who can accurately act as a mouthpiece for the music and a voice to the ideas and emotions that forge the sounds together. Pigs x7 vocalise their presence perfectly well and it is reflected in their all-round solid performance and the reactions of the crowd.

Old moshers, young beatniks, of all shapes and sizes, of all genders, colours and creeds banged their heads and convulsed their fleshy chambers until the centre of the room became the eye of a storm where nearby people would be sucked in and tossed around like atoms dancing with hammers. The wilder, likely more fucked-up members of the crowd seized the stage and dived off some trust-falling or christ-posing themselves into the audience, like bedlam in London. It was all happening at once. Five band members playing exceptional music and a room full of strangers dancing together in ritualistic chaos. Bodies scattering. All chasing a release. Everyone in some primitive state and out of society enjoying a brief escape from the savagery of civilisation in a world of brute dichotomous existence, ripped and torn apart at the seams, trying to find grey in conflicting black and white ideas and still looking at all angles of a blade. It reminds me of two quotes the first is from my granddad who used to always say “it’ll end in tears”, which to me always seemed like the wisdom of a soothsayer calling the infinite end times, the second is from Leonard Cohen who once said “never mind, we are ugly but we have the music”. And that’s really, what this whole gig was about for me; a chance to escape and laugh at the hopeless stupidity and surprising ecstasy of human life.

This will go down as one of my favourite gigs ever and it’s my top contender for performance of the year so far, sure every year brings a great new show to that canon but, this was something else. I’ve said it before and I’ll say it again, in this shitty, rage-inducing world we live in what we need is a tour featuring Pigs x7, Cattle, Sex Swing and Gnod. Failing that, I’d be happy to see some of Rocket’s bands tour with some of Eggs in Aspic’s bands, take note Newcastle Psyche Fest, I’m fucking watching you.