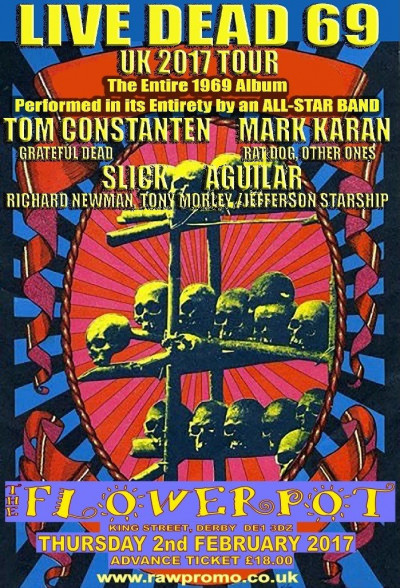 Do you ever feel like you’re the only Deadhead in the UK?

Are you even a Deadhead? Do you identify as such? Has the term been thrown at you, or have you embraced it willingly?

Or have you simply read a list of the classic signifiers of Deadheadedness and, like a hypochondriac reading a pamphlet on diabetes, recognised that all of the symptoms apply to you so you must, by implication, be a deadhead?

And what are those signifiers? Maybe your hair’s longer than it should be. Maybe you’ve a penchant for altered states of consciousness. Maybe you’ve been known to dye and tie your clothes. Maybe you’ve a greater tolerance of looooooong guitar solos than the average person.

But then you read a snotty rebuttal on Tumblr, a screed from a veteran in the form of seven questions, the subtext being that if you respond “no” to a single one of these questions then you are not, and never shall be, a deadhead.

Two of these questions give you pause:

Have you ever been to Haight Ashbury?

Have you ever recorded and distributed your own bootleg?

And then you realise that, having been born in the UK in 1987, you can never be a Deadhead. How dare you even think of yourself as such when you were eight years old and thousands of miles away from San Francisco when Jerry left us?

An appreciation of freeform composition is as American as star spangled apple pie. America did invent jazz, after all. And jam bands. Not long ago I wondered where all the UK jam bands are. They’re probably out there. They’re just not selling out stadiums and inspiring people to give it all up for a life spent selling grilled cheese sandwiches in parking lots.

And though The Dead are one of the most influential bands of the past 50 years, you wouldn’t know it in the UK. BBC 4 will never screen a “Dead at the BBC” compilation. Mojo will never release a special edition magazine with an embossed stealie on the cover. Bob Weir will never play the legends slot on a Sunday afternoon at Glastonbury.

Yep, I appreciate that the past three things I listed aren’t the most auspicious of accolades, but they still count. I once went to a beer festival in Derby. Hung across the hall was bunting with alternating album covers by Pink Floyd and Hawkwind – just because.

Even during the heyday of The Dead, my cursory research suggests that the UK was somewhat starved of attention. As far as I can tell, they only played on these shores 24 times between 1965 and 1995, and up to nine years could pass between visits. Their last show here was on November 1 1990. Jerry died five years later.

So barring tribute acts, is this Live Dead 69 tour the closest the UK’s got to a Grateful Dead tour in 27 years? Maybe. Tell me if I’m wrong, because this does feel like a big deal.

For this is no mere tribute band! I don’t want to name names because I was lead to understand that the lineup’s changed a little since the tour began. But onstage we definitely have a couple of auxiliary players from a couple of Bob Weir bands, and we probably have a couple of guys who once played with Jefferson Starship – and perhaps even Jefferson Airplane!

And then there’s Tom Constanten, who was in The Dead. He played on Anthem of the Sun, Aoxomoxoa, and, of course, the mighty Live/Dead. He’s our link to the past! Our link to The Dead!

But even if he wasn’t, he’s a legend in his own right. Close friends get to call him TC. During his time as a computer programmer for the US army, he dropped acid and used military hardware to compose electronic music. He’s met Umberto Eco, and as an experimental keyboardist he’s rubbed shoulders with Pousseur, Boulez, Stockhausen, Riley and Reich.

He’s onstage tonight against all odds, having reportedly broken his neck while walking to the post office in a storm last August. And, sorry to say, he does look a little unsteady on his feet. But the moment he sits behind his keyboard and starts playing us through a sparkly solo piano version of Mountains of the Moon, all reservations are immediately dispelled.

As he segues effortlessly into those magical notes that kick off Dark Star, two things become clear: that this just might be a very special night, and that, while we were promised a complete run through of the Live/Dead album, that’s not quite what’s going to happen.

He’s joined by the rest of the band, and they play along to Dark Star for a bit, but before you know it the jam has morphed into Not Fade Away. And then it hits me – they’re not called Live Dead 69 because they’ve mastered that particular live album. They’re called Live Dead 69 because they’re here to bring us an approximation of the sort of show you might have seen The Dead play in 1969. Smashing.

So for nearly two and a half hours, we get an approximation of the sort of show you might have seen The Dead play in 1969. And it’s smashing. Not Fade Away gives way to Going Down the Road Feeling Bad, which is followed by a searing Good Morning Little Schoolgirl. The band’s tight. Of course, their interplay isn’t as effortless and mercurial as that of The Dead – because what is?  But their sprawling polymelodic bliss will do very nicely, thanks.

When they launch into I Know You Rider, I start to wonder – and I do mean wonder – at just how extensive their repertoire is. What else could they possibly play tonight? I’ve since been able to study a number of setlists online, and they do seem to mix it up with an impressive collection of covers, crowd-pleasers and deep cuts.

So all things considered, seeing Live Dead 69 does appear to be the closest you can get to watching the Grateful Dead in 2017 – unless, of course, you’re able to head across the Atlantic and you’re able to stomach John Mayer. The only criticism is that it all feels too practised and polished. It doesn’t feel like they’re improvising so much as running through a series of painstakingly-rehearsed extended compositions. But that’s a small complaint indeed. Just hearing these songs live is good enough for me right now.

Eventually they do commit to delivering Live/Dead in full. They don’t quite jam endlessly on Dark Star. I was really hoping they would, but in retrospect I’m glad they didn’t. Good luck recapturing that bottled lightning. They do riff on it for a while, and things get about as transcendent as it’s possible to get in the backroom of a pub in Derby; and the goosebumps still rise as the vocals kick in; and the segue into St. Stephen is perfect; and the sudden shift from hard folk rock into jazz fusion for The Eleven is stunning; and Pigpen wouldn’t spin in his grave for this performance of Turn on Your Love Light.

Yep, Turn On Your Love Light. From riotous jazz fusion to ecstatic gospel. Effortless. Marvellous. This must be quite the moment for TC, who throughout all this has been sat there quite happily in the corner on his keyboard. Anyone who’s heard Live/Dead will know that this was Pigpen’s big moment. He started chanting and didn’t stop for nearly 15 minutes.

For a long time I pictured him conducting his sermon from behind his keyboard. But if you read TC’s Wikipedia entry, it seems that by 1969 he’d already taken over main keyboard duties from Pigpen, which freed the latter to deliver his sermon from the front of the stage, tambourine in hand.

What’s running through TC’s mind at this point in the show? Are his eyes closed in remembrance of his late, late, dear friend Pigpen? Or are his eyes closed because he simply cannot look at that guy in the front row who, to all intents and purposes, is Jerry Garcia. Short, stout, bearded, bespectacled: Jerry was there, man.

Nature calls during the bluesy slow jam Death Don’t Have No Mercy. Overheard in the men’s room: “Hey! Death don’t have no PISS BREAK!”

They create a little bit of feedback, just so they can say that they played through the Feedback section of the album. And after that things get really wonderful. They’re joined by Liz Lenten, singer of Auburn, who supported tonight, for a performance of Donovan’s Fat Angel. That’s the one with the chorus that goes “Fly Jefferson Airplane, get you there on time.” Things are getting heady here!

There’s another nod to Donovan later on, when his Mountain song is quoted during a closing blues jam. There is a Mountain was, of course, borrowed by the Allman Brothers Band for their gargantuan Mountain Jam. Someone really should write an article – or a coffee table tome – about Donovan’s influence on the jam band scene.

By the time they’re playing Jerry’s Deal anything seems possible. I never saw The Dead myself, and at 2.1 hours tonight’s show is about 1/8th the length of a Grateful Dead show. But still, I want to believe. I want to believe that this is what it was like. In any case, it’s certainly as close as I’ll ever get.

The ultimate proof that this was more than a mere nostalgic tribute show? On my way out I was handed an elaborate 12 page pamphlet for a religious commune that was cleverly disguised as an underground psychedelic zine.

You don’t get that at The Australian Pink Floyd Show.

Mountains of the Moon
Dark Star (Intro)
Not Fade Away
Going Down The Road Feeling Bad
Good Morning Little Schoolgirl
I Know You Rider
Dark Star
St. Stephen
The Eleven
Turn On Your Love Light
Death Don’t Have No Mercy
Feedback
Fat Angel
——————-

The Deal
Johnny B. Goode
And We Bid You Goodnight