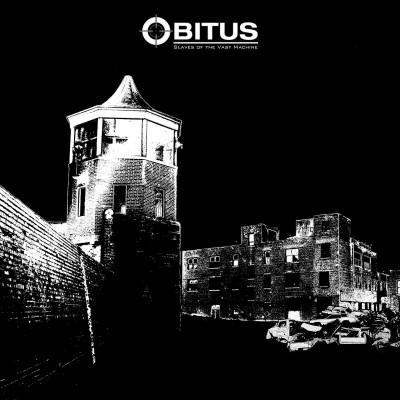 Slaves of the Vast Machine by Obitus

Obitus have stared down the barrel of dystopian torment for years, feeding omens of oppression to the already oppressed masses. The Swedish post-black metal act revel in the mire of a ruined nation as much as they wallow and have an uncanny way of painting a bleak picture of totalitarian hopelessness… boot plus face plus forever comes to mind. If the future looks like this then get your stomping shoes on… I’m in!

Cold and calculating, Slaves of the Vast Machine moves with unrelenting force over its monolithic 45 minute runtime, with each minute passing fluidly and not in any way dawdling by. No filler all fucking killer. Structured beautifully and insanely fulfilling this single piece of apocalyptical hatred oddly enough breezes by leaving behind remnants of a devastated distant time. Booming with scathing icy riffs that’ll strip the flesh off a cat and pummelling machine gun blastbeats this epic single track is truly a black metal behemoth built to play over the dystopian wastelands as the soundtrack to armageddon.

Reminding me somewhat of Anaal Nathrakh’s Mick and Dave for their assigned arsenal, Obitus’ vocalist Johan Huldtgren and multi-instrumental-meister Anders Ahlback reign supreme as both members put the entire fury of miserable emptiness into this release, along with the boot and laces. Huldtgren’s venomous vocals seethe with the passion of a man defiled by a life in suffering, going full method actor for his part in this story. Ahlback weaponises the hatred by methodically obliterating your senses with terrorising blastbeats and firestorms of scorched earth riffage that’ll stick in your head for days.

Its concept unleashes a whirlwind of images in one’s mind, of destruction and mayhem, as does its merciless instruments of torture, couple that with flashes of a marching regime of death-minded drones and unstoppable tanks crushing the skulls of the unfortunate and 2 in the am starts to get a little crazy. From second 1 it’s a glorious assault on the body and an indoctrination of war and anti-humanity all played with such ferocity over a backdrop of bleakness. Seeds of hope are scattered throughout the track in form of more melancholic passages only to be ripped up and left to die with a hellstorm of frenzied attacking guitars and pummelling drums blasts. From concept to creation it does its job with pure imperium.

Over 45 minutes it’s easy to get lost in repetition and a track of this length has to keep the listener gripped by the throat throughout. It does just that with endless determination and carries the listener safely through the broken land. It would be easy to simply split the track into several contrasting songs and just splice those together to form a beast, but Obitus have produced an ungodly monster that ebbs and flows savagely, only briefly pausing for more harmonious instrumental interludes until returning to the cold mechanical destruction. It feels like the same track without getting monotonous yet delivers its message with renewed vigour at later segments. Reprising riffs transform into more dissonant and furious assaults harshly ushering in a progression possibly into a more severe kind of hellish humanity all the way to the climatic face-melt of the tracks end.

Slaves of the Vast Machine is a tough one to review, but in a way easy at the same time due to the fact it is one single piece of music to focus on that challenges the listener to do one thing… get through it in one sitting… and it’s a simply done and enthralling task to do. Look, I could blab on for ages about all the nuances, intricacies and this that and what not but there really is only one thing to do… grab yourself a copy of this album and fucking listen to it. You can either raise the white flag and give in or raise the blackened flag of Obitus and one big metal middle finger to the slave drivers of oppression… the way things are going now, this might just be the soundtrack to your future.