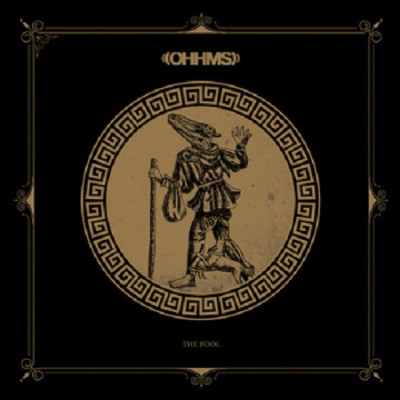 Not long ago a work colleague described a shirt I was wearing as “fierce”. I took it as a compliment; after all, fierce was exactly the look I was going for with the purple, green, black and blue paisley-patterned garment with an improbably tall collar. Soon after, I heard OHHMS’ latest album and exactly the same word popped into my head. And again, if I were to meet the band, I’d tell them it is meant as a compliment. Because which ever way you use the word, it suits this album. Whether you are talking about a predator – exuding power, roaring, massive, muscular, sometimes sensitive – or my shirt – loud, psychedelic, just the right length – it describes The Fool to a tee.

The first song proper on the album, ‘Magician’, which follows an acoustic intro, thunders into your ears with some brutal drums, before an angry riff accompanies Paul Waller’s opening lines. True to OHHMS’ previous records, the song twists, turns and changes throughout its duration, but what is different from their previous two-song EPs is that the band have honed their writing skills so the tracks are nowhere near as long and unwieldy as they have been (except for the final track, but more on that later).

This is a good thing: everything is tighter and more lively – each segment of the song is given enough time to breathe, yet none outstays its welcome. In ‘Magician’, the first of the Tarot card themed album (apparently you get free cards if you buy the vinyl) there are many hooks, Mariana trench-deep grooves and widescreen riffs – I won’t go into them here, you can find them out for yourself. But I will say this: they are well worth your trouble.

‘The Hanged Man’ begins with an ethereal yet spooky chant, which gives no signal as to just how huge and surprisingly catchy the song is. Waller’s vocals are fantastic, just the right side of bombastic – and powerful enough to match the sheer size of the songs. The 13-minute duration of the song seems to go by in an instant, yet by the end you feel as if you have been taken on a journey by the medium of heavy music. True, it may prove insurmountable for some – enormous slabs of guitar interrupted by pensive solo bass ruminations may be too much for casual listeners – but man, if nothing else, I urge you to listen to the gear-change just before the seven-minute mark. It goes from pounding noise rock to seventies hard-rock-style shuffle wrought enormous via a tension releasing guitar trill and drum roll – and it is incredible.

As if that wasn’t enough, ‘The World’ follows and it follows the previous tracks in being intricately written, sublimely delivered and with some seriously epic phrases. The band are clearly angry about the state of the globe, but it doesn’t hamper our enjoyment of a massive, satisfying slab of doom seen through a wide-angled lens. The penultimate track, ‘The Lovers’, is the biggest sign that the band have grown from their previous EPs. It is mellow. Like really mellow. Like Spaceman-3 mellow. In fact Waller, who is joined by an female in a duet, has the same kind of melancholy, soporific tone of Jason Pierce when he turns down the volume. The song itself is quite beautiful. And mellow. Did I mention mellow?

‘The Hierophant’, however, harks from the OHHMS of old. The 22-minute epic begins with a loooong drone which draws you in with its malevolence. It is almost three minutes before the opening line of “We are the shamen, you seek our guidance” breaks the spell. And it is a further three before the first drum is hit, with a repetition of the same line. It is so big it is almost unwieldy, lumbering as it does between different time signatures and moods varying from grumpy to fuming. And, take it from me, it is almost impossible to re-immerse yourself in the song if you get interrupted. But if you give yourself the time to tackle the whole thing, you will be rewarded.

As you will be throughout the entire album. Yes, it is fierce – and like many fierce things, it may at first seem unapproachable. But just like that shirt I was talking about, it may become one of your favourites.