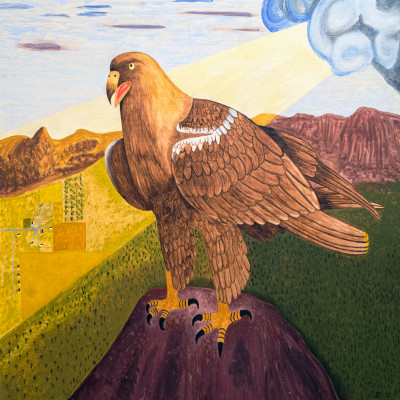 Kompost by Flowers Must Die

Flowers Must Die’s first LP for Rocket Recordings, Kompost, is both an excellent addition to what seems to be the label’s best year to date and an excellent blend of sounds and styles that fans of the label will already love. To Rocket fans unfamiliar with the group, their sounds is like a bricolage of the gnew Gnoomes, Julie’s Haircut and Hills; you could always check out their Rocket Recordings debut EP as well…

Rolling snares like rapid beating eyelids flutter in ‘Källa Till Ovisshet’ like some deep hallucinogenic surge to the back of the brain as squelching lysergic pulsations squish aural preconceptions as oscillating synthesisers. Guitars bleed in and out but, the core of this track is a levitating sense of acid kicking in hard and fast as space, time and sensory notions swelter in a lightning storm of cerebral activity. The drumming like some sensory overload registering items in a room that has become estranged and unfamiliar fast, everything twists and turns and explodes and burns, in a iridescently incendiary hurl of psychedelia. Barely a breathe stands between the first track and the next, ’Hit’, the sophomore track on the album is no slump, vocals sweep into the mix with the bubbling synth patterns and take into something vaguely reminiscent of Julie’s Haircut in the heights of an excursion through LSD. Lysergic soundscapes and carefully segueing transitions begin to reoccur like conversation topics in a binge; the same thing over and over becoming gradually more twisted and narcotic.

However, the songs arguably become more groove-orientated as these sweltering bridges become increasingly mind melting; as though the further away the two parts of the wider whole of the album, slam together harder and with more force with each diversion from the album’s core elements. Like an elastic band stretching further and further away from the original sound and snapping back to the core with a violent reproach of juxtaposition. This is especially evident in the danceable ‘After Gong’ and its deep-sea-raving, gurn-dancing compatriot, ‘Why?’. The contrast in the latter is especially stunning; with the crushed pout of dingy sounds providing a strange sense of beat and melody whilst the spaced-out vocals provide distance; it all seems otherworldly, that is until the woodwind instruments come out, creating this dichotomous sense of grounding and disassociation like reaching out for reality as some ungraspable light switch in the dark. You’re there but, uncertain where there is and so is the thing you’re after. Trust Rocket to find bands that will match up with any insane evening, binge or bender you’re likely to go on and Flowers Must Die have certainly proven with this Rocket debut that not only are they as freaky as any other band on the label but they’re also very much on the same plain of existence. Wherever, the fuck that is…

‘Hej Då’ is like the bleakest pit of insomnia; hard-pounding drums like a relentless heartbeat, whirlwinds of noise thrashing anxiously, cacophony chaos permeating through every layer of the track. The elastic band snaps back and hurts my fucking brain; so much happening, so aggressively. It’s what I imagine a guitar having a nervous breakdown sounds like. Weirdos and beatniks will likely love it; I do.

Out of nowhere, ‘Don’t You Leave Me Now’ provides the ying to ‘Hej Då’s yang, a completely opposing track that really takes the listener by surprise imbued with this twisted, psychedelic sense of funk and beautiful melodic solos; it’s a stark contrast to the delightfully abrasive track before it and experiencing the album as one long whole; stands out as almost one long chorus in the middle of the wider piece. ‘Hey, Shut Up’ is my favourite vocal performance on the album; the singing reminds me of Bjork, in the way the melodies seem so seamless and expansive and uniquely out-of-reach. It’s cool how it really feels like the focus shifts onto different aspects constantly; like entering a room for the first time or re-familiarising a room you know very well in a new headspace.

The conclusion of the album comprised of ‘Där blommor Dör’ and ‘Svens Song’ in a way reminds me of Morphine; the way that for example, on Cure For Pain there’s the slow brass intro of ‘Dawna‘ that then fires into ‘Buena’. Here ‘Där blommor Dör’ walks us to the edge of the cliff and whispers “you can fly” before gently shoving us off into ‘Svens Song’. The final track begins with a splash, venturing out into a strange dissociative psyche odyssey spearheaded by an unfamiliar vocal which adds a notably peculiar feeling of estrangement or ostrenanie (hi, Keith Marley!). It’s the perfect end to an album that feels like one long, fluid trip, with peaks and troughs that glimmer and dazzle like the Easy Rider graveyard scene. Acid out of place and people out of sorts.

Flowers Must Die live up to their reputation with this fine first full-length offering for Record Recordings. A crucial component in Rocket’s already landmark year of releases.

They are on tour later this month:

And play Supersonic Festival in June.