In the furthest, forgotten corner of Europe, in between Romania and Ukraine, you can find the country Moldavia. You might know the country, because in some strange twist of faith your local football team ended playing a team from there or even your national football team. It’s there where most people’s knowledge of Moldavia ends.

Moldavia became a country on its own in 1991, but historically it’s been a turbulent region. Inhabited by the Dacians in the ancient past, it is said the region gets its name from a combination of the words ‘many’ and ‘fortress’, which would be along the river. Part of the historical, often overrun Moldavia is now part of Romania, the other part being the independent Republic of Moldova.

Moldavia is historically intertwined with Wallachia, Transylvania and Bucovina, all parts of Romania. The historical connection runs deep, even to this very day. The flags are not very different even and there’s talk of unity. On the other hand there’s a pull of Russia on certain autonomous regions. In between, Moldavians find out that they also have their own identity. Harmasar is a band that expresses that nationality and identity through their music and art. Guido Segers got to have a chat about this with the band.

(((o))): Hey, could you kindly introduce yourselves to the readers?

Harmasar: Ladies and Gentlemen, boys and girls, greetings! We are Harmasar and we’re a folk/pagan metal band from the Republic of Moldova.

(((o))): How did you get together as a band and started out making music? Have you guys played in any metal bands before Harmasar?

Harmasar: The legend says that as a band Harmasar was born in September 2013 (the day of our first concert), the founding member being Mircea (the drummer). Most of us had some experience of playing in a band before Harmasar, but the majority of these bands were popular and known only among its members.

(((o))): Tell me about Harmasar? What does the name mean and what is the concept or story you are telling with this band?

Harmasar: Harmasar in Romanian stands for stallion (you know, the one with balls, with testicular integrity). The main message we are trying to present is the one of ‘knowing your roots’, remembering the great and heroic deeds of your ancestors, as well as the idea of conservation of the traditional values.

Our inspiration comes from ancient Moldovan/Romanian folk tunes and music, like doina’s and hora’s. As for bands, we find inspiration in the like of Eluveitie, Arkona, Korpiklaani, Bucovina.

(((o))): You’ve recently released your debut album Din P?mânt. A thunderous folk metal album, that seems to lean close to the more folkish expressions with peculiar traditional instruments and elements. What is the story you are telling on this album?

Harmasar: The closest translation of the title Din P?mânt, we guess will be ‘From dirt’ or ‘From dust’, with the meaning of roots, origins. This is also what the album is about.

(((o))): For people, like me, who know little about the past history of Moldova, can you introduce us into the material. What are the elements you are singing about?

Harmasar: Well, in this album we mostly sing about great battles, fought by our ancestors, so the songs ‘Daoi’, ‘Tapae’ and ‘Moesia’ are about the war between Dacians and The Roman Empire. ‘Vaslui 1475’ tells us the story of the war between The State of Moldova (Tara Moldovei) and the Ottoman Empire and particularly The battle of Vaslui. On the other hand there are also songs that criticise human vices and corruption such as ‘Na?iunea’ and ‘Porcu’.

Well, the main message in ‘Natiunea’ is to stand for the ideas you believe in. People should always remember who they are and where they are from: standing for the ideas that you believe in and always remembering who you are and where you do come from. In ‘Porcu’ the idea is to not let yourself be manipulated by anyone, especially by political forces and other empowered entities. Literally, it tells about not becoming a pig, a creature that is raised without values to be killed and eaten at a whim.

(((o))): Can you tell us more about the writing and recording process of your album? Is everyone equally involved or is there a clear division of tasks?

Harmasar: Yes, we find it more productive to have a good division of labour and tasks in the band. So the song writing process is performed by Max (the vocalist) mostly, band promotion and graphic design by ?tefan (the bass player) and the events, concerts organisation by Mircea (the drummer).

(((o))): What sort of traditional elements do you put in your music and which instruments do you use for this?

Harmasar: Well for the rhythmic part we used such elements as Sârba and Hostrop??, which was also used as a traditional tune for panflute as well as ”Ciuleandra”. In addition to the panflute (Nai) we recorded also some flutes (fluier, caval), violins and an accordion.

(((o))): Let’s discuss the art work, can you say a bit about the artwork you use and the visual aspects of the band? I understand you guys perform also in a traditional outfit?

Harmasar: The artwork was made by our friend Octavian Curo?u with our suggestions, it’s our vision on the album name Din P?mânt. As our songs are about our ancestors we have decided to wear similar outfit inspired from them with some elements created by us.

The artwork of the album is open for interpretation, we like to see that people find different things in it. In our vision it is a conglomerate, a synthesis of ideas. In Moldova we have a natural reservation called ‘One hundred Hills’ or ‘Suta de Movile’, which consists of a large group of hills of different sizes. According to the legends these are considered to be ancient warrior’s tombs. So basically the hill on the picture has the signification of an ancestral grave, a tomb representing at the same time: the end, the past, our history and roots. On the other hand this hill is also a mother’s womb, with a child to be born, the foetus representing the future, the birth of a new generation. So essentially it is like a synergy between these two ideas, past and future, like the Phoenix rises from its ashes, the child is waiting to be born from the grave of his ancestors. 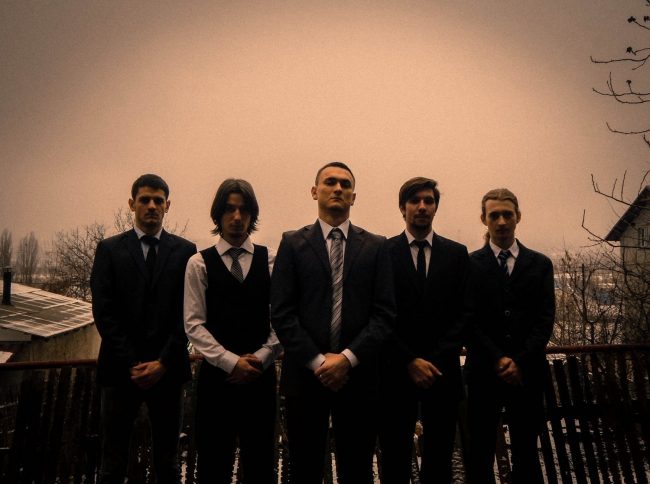 (((o))): Can you tell me a bit about metal in Moldova? How did it get started in your country and which bands pioneered the genre?

Harmasar: As we know, till this time there were and are a lot of metal bands here in Moldova, but the most remarkable one was Accident (death/thrash metal) that was formed in 1988.

(((o))): What is the scene like now? Where is it centred and do you guys have relations with bands from neighbouring countries?

Harmasar: ?The scene is centred mostly in Chisinau, the capital of Republic of Moldova, where you can find several places for bands to play live, and also some open air festivals during the summer. We have some good friends in Romania and Bulgaria playing in a well-known bands there with witch is always a pleasure to hang out and play some shows together.

(((o))): Which bands from Moldova do you think people should check out and why these ones?

Harmasar: You can check out Abnormyndeffect – this is a polyrhythmic grindcore/death metal band that is one of the most appreciated of its style in Europe. Their songs are about our social and political problems.

Harmasar: The most primary for us now is to have a tour for supporting our debut album in Romania, Bulgaria, Ukraine and other countries. To meet with our great fans from there and to reach a new audience.

About other plans we cannot tell, yet…

Harmasar: I don’t know any dish that I can compare to our music, but probably it would be a Grilled Ottoman with some bloody sauce, but we haven’t tasted it yet. (joking, referring to the bloody history in wars with the Ottoman empire).

The first dish that came up in my mind is Ciorb? de V?cu?? (beef broth), it helped us a lot to survive tough mornings during the past tours.