(((O))) Live: Stick In The Wheel: Gnod Live at Electrowerkz 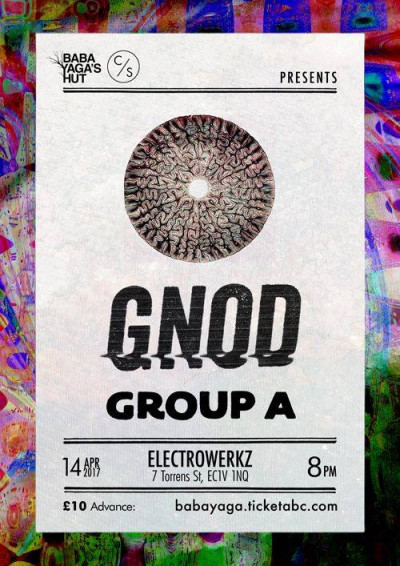 Where the average gig-goer might go to see the average band they enjoy and hope that they’re on the same brainwave with the band as to what songs they’ll do; Gnod have earned a reputation for me as a band that I watch because I am always wondering what they will do; as far as I know every show is different, though at the very least, I’m certain that every exhibition of the band is unpredictable. I figure the worst case scenario is I’ll get some impeccable rendition of tracks from their more recent releases and even that would be astonishing really. The fact of the matter is that Gnod are far, far, ahead of their fans and that wormhole through to the future is the exact reason their gigs are always once in a lifetime. 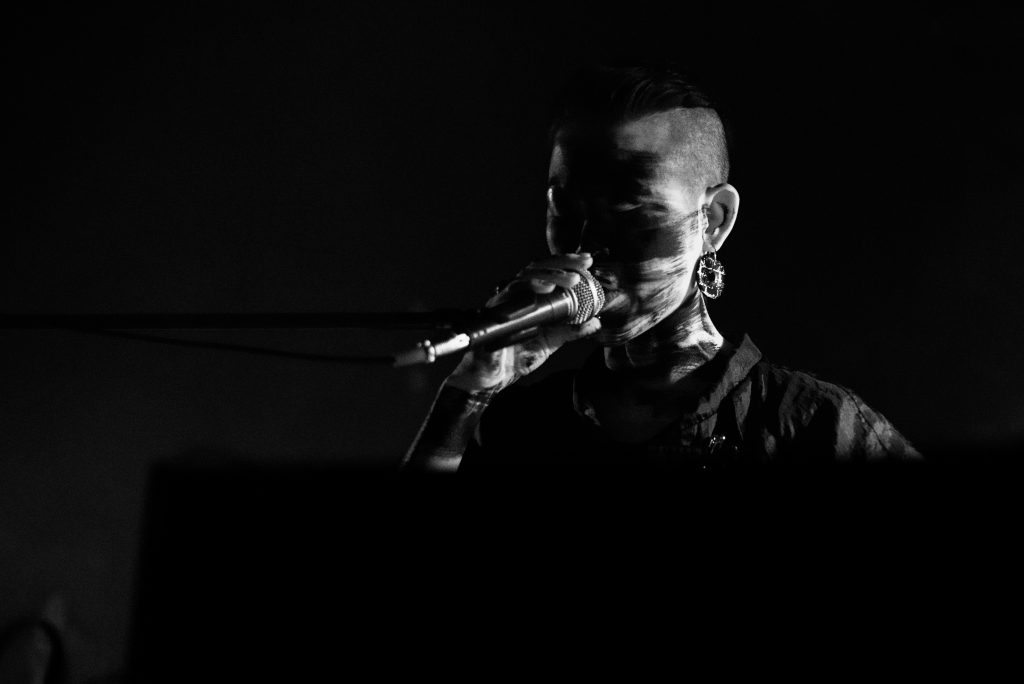 When I saw Gnod + Group A on the line-up for Electrowerks, I presumed that Group A was so sort of branch-off group from the Gnod Gnetwork that feature members of the band and/or artists from the wider collective of hominids involved…what I encountered was, very, different. Two young, asian women strode out onto the stage; in these ghostly, ornate robes, their set-up was wired to the teeth with madness. Ambient pads rose slowly through an ominous start; reflexive of the tentative curiosity of the anticipating audience. At first I begun to see the duo as something slightly evocative of Kuro but, it soon became clear that there was no one doing what they were doing. The deep, oozing black void they created was pierced only by menacing strings cutting through the mix via a stunning arrangement of guitar pedals. My jaw by this point had dropped. The vocalist of the band began to sing eerie melodies brutalised by effects and then suddenly produced a switchblade from somewhere and began to caress it across her body. It was absolutely stupefying; as the tracks would pulsate; the singer violently bludgeoned a piece of metal with the blade creating one of the most violent and effective cymbal sounds I’ve ever heard. Each long piece from the band seemed to mesmerise the audience and it often felt like everyone was painfully eager to applaud; whenever the chance arose; Group A got an impressive and well-deserved ovation from the stunned faces in the crowd. They were utterly spectacular.

It was cool to catch up with Jose Caamano at the show and to meet E&D’s Simon Kallas for the first time; that’s another thing I love about Baba Yaga shows, there’s always good bands and good people involved; I don’t have to know someone who is going to want a ticket; I just go and know cool people will be there. Living in London is pretty good in this sense; also you can get super fucked and the public transport will still be sound when you need it. 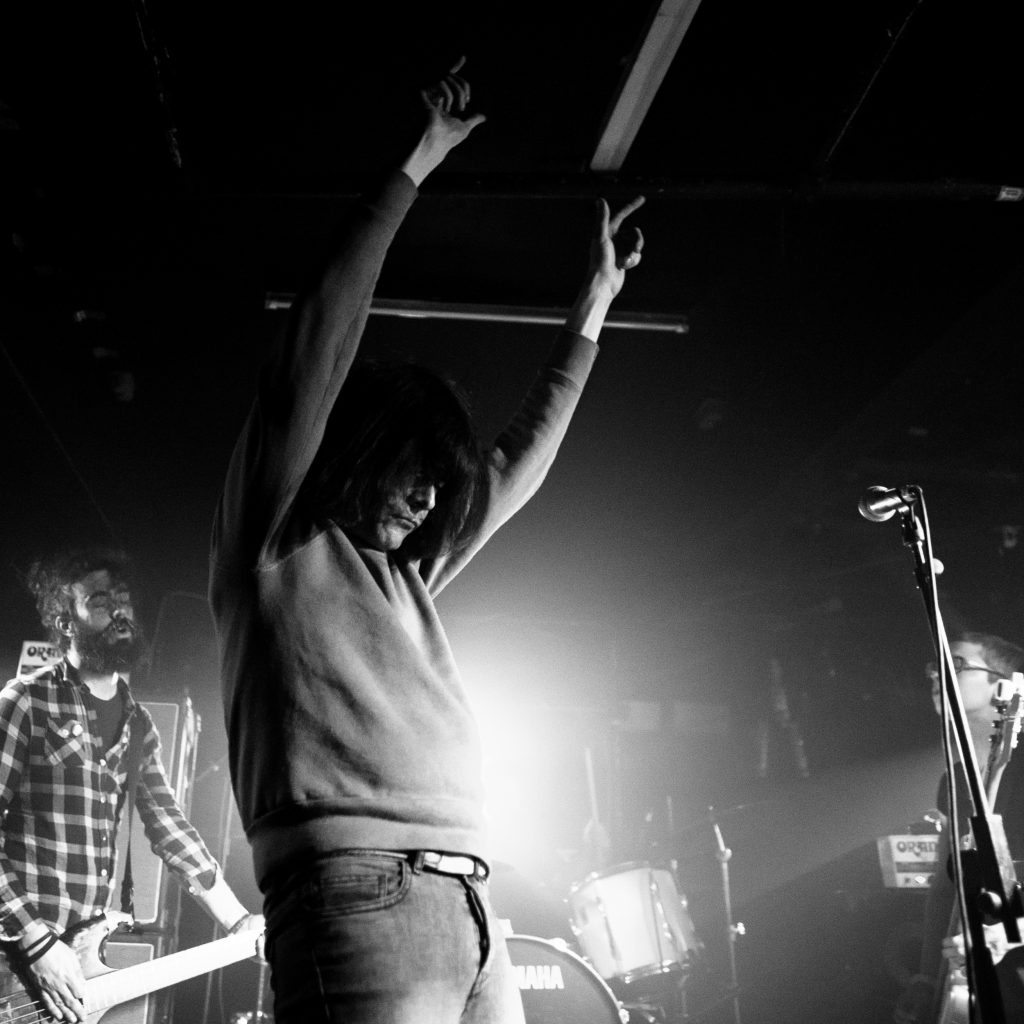 When Gnod emerged onto the stage I saw some familiar faces and at least one wholly unfamiliar face. To me, this was a good sign that Gnod would continue to exceed and dazzle my expectations; I had no idea what songs they would play, whether or not they would have been released or who would be playing what. The first big surprise for me was that Paddy was not singing and instead it was some dude who came out with his jaw swinging like a true deviant and his style very much reflected both his demeanour and another core characteristic of the band: this was a disassociated, almost anti-music performance where the most recognisable aspects of the band’s songs were astonishingly, torn apart by disembodied vocals, relentlessly intensified instrumentals and an unpredictable energy in the set. Possibly the best summary of the set would be the evening’s rendition of ‘Bodies For Money’ which took the song as the most-well known track possibly of Gnod thus far and gurned it into an estranged meltdown masterpiece that focused on the almost operatic level of sheer horror at the psychological centre of the track. The most recognisable rendition of a track was the evening’s exhibition of ‘Paper Error’ which saw the track churned through an ear-blasting organ grinder of a set and spat out like some grotesque Play-Dough sculpture of sickness and malcontent. It was absolutely stunning. Gnod is not a part of the machine, they remain a stick in the wheel, moving to the beat of their own piece of metal and venturing further and further into the bleak unknown like some spark of hash falling through the night into darkness and dissipation. Gnod abseil into the abyss and guide us through light, not to some place of hope but, to some semblance of truth rather than the distorted reality we’re all too often presented with. The band who held up ‘The Mirror’ in 2016 seem to effortlessly convey the socio-political climate of a time and what’s even more impressive is how they frame their performances and releases to match the fluidity of their social commentary. If ‘Just Say No To The Psycho Right Wing Facist Industrial Death Machine’ succeeded as a primal scream erupting from the socio-cultural nadir of the west; Gnod live at Electrowerks succeeded as the aftermath. It was the exhausted sores of a head nursing missing clumps off hair; a brain sweltering from a hangover. Anger buried under the limes of intoxication. Gnod’s new collaboration with Radar Men From The Moon; Temple of BBV was indicative of this atmosphere of anger falling to grieve and impotence and powerlessness falling to intoxication and disassociation. The band goes underwater and comes up for air with each new direction in the project; I can’t help but feel like this represents society as a whole right now; escaping to introversion and resurfacing to see a world out of sorts; ideology sold for profit; bodies for money. If you don’t wanna bury your head in the sand then I suggest you reflect this twisted existence in some form of expression before everything is eradicated and dissipated. In the meantime I’ll be getting high on unadulterated depictions of non-fiction in the arts and approaching the disingenuous with an increasingly scathing disappointment. 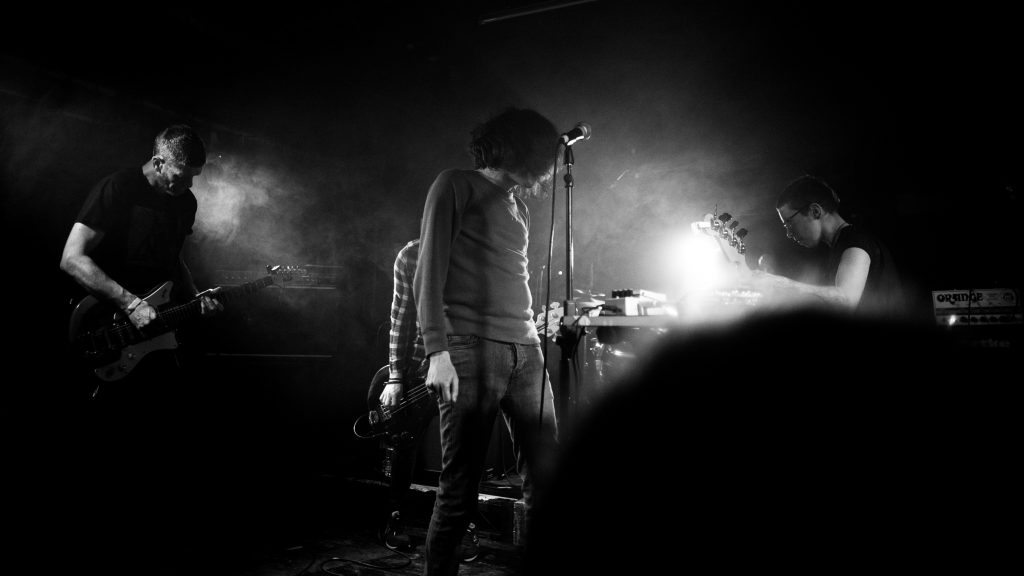 Gnod are the most essential band in Britain; it shows in everything they do but, I assure you, watching them live is an impeccable and unpredictable experience. Gnod have sometimes attached the backronym of ‘Got Not Obvious Direction’ to their band, whether or not that’s the etymology or source of the name, I don’t know, what I do know is that despite how impossible it is to predict where the band will go; it is always revealed later that their move was a step forward.