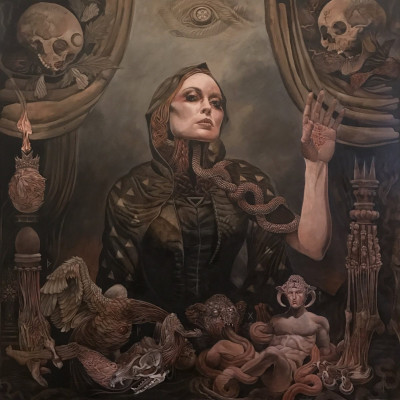 Rites Of Passage by Sabbath Assembly

With Rites Of Passage being the sixth studio album from Sabbath Assembly, I have to admit that although I’ve heard this band in passing, this is my first experience delving into the group fully. What piqued my interest into fully wanting to explore their material recently was the knowledge that former Hammers Of Misfortune vocalist/bassist Jamie Myers was involved in this project. Being a big fan of that group and knowing that her involvement with them only lasted for a somewhat brief period, I was intrigued to hear her present day musical participation. Add in Gorguts guitarist Kevin Hufnagel and the addition of second guitarist Ron Varod of Kayo Dot, and I can safely say I was on board to hear what these talented individuals could create together.

With their sound firmly rooted in occult rock, the band throws in a heavy doom atmosphere with flashes of progressive brilliance to give us some unique music. Opening up the album with ‘Shadows Revenge’, the band show off an almost progressive/stoner-rock direction with layered vocals and a nice power chord drive. This comes across as old-school without sounding too derivative of the obvious genre choices, with guitar notes being strewn and jangled across the song which helps to sprinkle some added magic upon the composition. The intricate playing of all instruments and hard and straight-forward momentum of this song shows that Sabbath Assembly is going their own way. If you are a first time listener and assume that ‘Shadows Revenge’ is a gaze into what the album will sound like are most likely going to be disappointed as the opening song is a more straight-forward jaunt, with the rest of the album opening up a warm and emotive doom sound with only flashing memories of the introduction of the album coming forth.

‘Angels Trumpets’ digs into intricate layered guitar melodies (and no trumpets) to open the song and then delve into a doom/sludge/stoner chant from Myers and co. that makes you wonder what will come next. After the rumble dissipates, there’s a very slow and brooding lurch that transitions back to the former section of the song. It then speeds up and goes into a mid-paced haunting guitar solo that compliments the eerie general air of the track. ‘I Must Be Gone’ goes into full occult mode with that familiar uncomfortable lurch that I’m beginning to digest beginning to take full shape. The slow pace to the opening speeds up with a full emphasis on the punishing doom aspect of the bands sound. There’s a nice light push in the direction of the song with a great melody at the closing mark. To compliment that track, ‘Does Love Die’ goes into lovely acoustic picking with equally lovely vocals that gently lulls at the eardrums. There’s beautiful haunting warmth to this song, and it flows really well and serves as a great mid-way point on the album.

‘Twilight Of God’ shows off soft and tempered drum work that gels with the bass and in turn compliments the acoustic/electric mix of guitars. The pace picks up in the last two minutes with dominant riffs added to the mix. I think this track exemplifies how the band can go from something so subtle to a forceful heaviness and cohesively make it work without it sounding out of place. ‘Seven Sermons To The Dead’ has an interesting opening as it starts out fast and heavy and transitions into a great mid-paced push, as opposed to the bulk of how the other tracks start on this album. I think this is meant as more of a short burst to change things up before the close of the album. It’s a great, deliberate track.

Finally, ‘The Bride Of Darkness’ (coming in at almost nine minutes, the longest of the seven songs), goes into a nicely picked riffy march. The last few minutes go into a slow and haunting guitar-centric run with Myers equally haunting vocals providing the perfect duel to the instrument. This song is a great way to close out the album, showing how diverse the group can be and how they epitomize this trait on this track.

It’d be hard not to draw comparisons to Jamie Myers involvement with Hammers Of Misfortune permeating the sound of the album upon first listen. However it almost sounds like there are some definite Ghost comparisons in terms of melody, and perhaps Saint Vitus in terms of the punishing brooding doom that comes out.

I really enjoy how the band go back and forth between the implied heaviness and doom heaviness. What I mean is that sometimes a band writes something heavy in terms of a general instrument attack, but the doom heaviness that Sabbath Assembly brings to the table is completely genuine and not just used in a way to gain attention. The musicians truly believe in the art form of being heavy and doom-laden, not only with the instrumentation and Myers haunting vocals, but with the imagery that the band concocts with the occult theme found within their sound. I also thoroughly enjoy the layered guitar sound from the team of Kevin Hufnagel and Ron Varod. It goes from forceful and driven to emotive and melodic, sometimes at the drop of a hat, which is welcome to me.

Although this bands sound is a bit out of my comfort zone with what styles I usually gravitate towards, this album was too good to make comparisons. Sometimes the slow and deliberate sounds with flashes of up-tempo pieces make for a more deep and emotional connection to the music for me, and with Sabbath Assembly, I feel like I’ve found that happy medium.