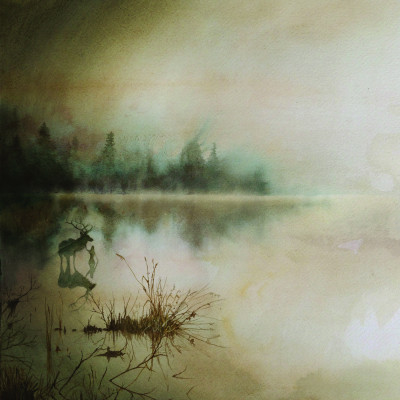 Most bands are pretty straightforward to categorise: they play that, or they sound like this, or they fit into genre such and such* (*insert grindcore, happy house, folk metal, etc., as you require). But every so often you get a band that doesn’t work to this pattern. Sólstafir are one of those bands that never stand still, but evolve, change and challenge. From their early beginnings as a black metal band, to the progressive metal with black metal roots of Svartir Sandir and Ótta they have never stood still.

To me, Ótta screamed Iceland. From the roaring, yearning passion and anguish of the vocals, to the stunning windswept beach and imposing cliffs on the cover, complete with the cragged man who looked as old as the rocks behind him, the album was bleak, majestic and other-worldly. The urgency, the melody, the wonderful sound of it. Berdreyminn is the evolution of Ótta, but in a much more expansive way. Their metal roots are far behind. The music, which is far more rooted in rock than metal, and often with a nod to 80s and 90s alt-rock outfits like Sisters of Mercy and The Mission, didn’t shout Iceland as much to me on the first few listens. It struck me as the work of a band who have settled down a little. Still Icelandic, but relaxing in a cosy cottage by a warm fire, looking out at the view, rather than outside screaming anguish at the glaciers and black sands.

But after five or six ‘spins’ (or whatever you do with an mp3 file) I realised that this is still Sólstafir, but with a new sheen. They’ve broadened their sound, incorporating more expansive elements of hard rock, with gorgeous lifting melodies, incredibly catchy grooves, thundering riffs, lilting piano and the familiar plaintive, earnest vocals of Aðalbjörn Tryggvason.

Opener ‘Silfur-Refur’ starts with an eerie drone and single picked tune, perhaps evoking the sepia-toned front cover, a watery landscape with distant trees and a lone stag. Then a heavy riff takes over, building with Tryggvason’s recognisable call. Second track ‘Ísafold’ is all warm rich tones, uplifting. It’s very accessible, catchy stuff, being the closest to the 80s feel I mentioned, with a lovely Nephilim-esque bass line in the middle.

Sólstafir pace the album superbly, with intros that start quiet and build, mid-sections that rumble and roar, and outros that bring the listener down again. There are quiet moments, such as the piano-driven ‘Hula’, which uses an operatic backing vocal that adds a lovely dimension to the vocals. The next track, ‘Naros’, returns to the other-worldly sound for which the band are loved, rising to a deep, jangling rumble with a hooky melody played over the top.

As with Ótta the vocals convey emotion to every track, ranging from joy to despair and anguish. All of the singing is in Icelandic, leaving most listeners in the dark as to what’s being said. But it’s doubtless all from the heart.

At almost an hour long it’s all over too soon. The mellow ‘Ambátt’ has a dreamy distorted guitar sound with a piano accompaniment that has the sound of a jaunty 90s indie melody. Then closer ‘Bláfjall’, which is possibly closest to Ótta territory, being the heaviest track on the album, with a driving riff in the second half that is held back by keyboard reminiscent of Deep Purple.

The album has the same distinctive sound that makes each Sólstafir release unique in its own way. It has a rounded feel; it’s catchy and accessible, with hooks that will stay with you for weeks. It took a few listens but this album is definitely a worthy successor to the masterful Ótta, but it’s not Ótta 2. My album of the year so far by a mile.