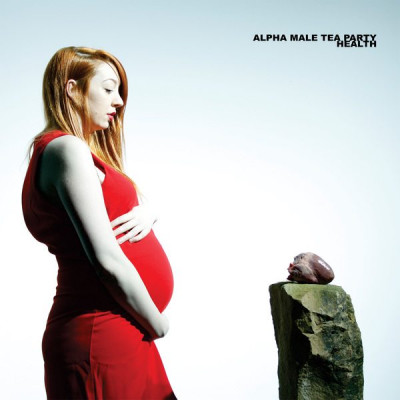 Those generous Alpha Male Tea Party fans must be simmering in their own ecstasy oozings right about now. Their various donations have covered the costs of the band’s retreat to the Oxfordshire countryside to unload about 3 years’ worth of brain juice in the form of 44 minutes of enough skull-rattling, aural debauchery to drown out the noise of Theresa May’s musket laying waste to a skulk of foxes outside the studio window. With the release of Health came the announcement of a worldwide mega-tour of Leeds, Nottingham, Glasgow and Edinburgh; with token appearances at Clitheroe Cloudspotting Festival and Oxford Truck Festival for the benefit of the 6 people who can draw the frankly grotesque parallels between clouds, trucks and heavy math-rock. (Disappointingly, Clitheroe and Oxford actually pay no homage to the facets of their names that they purport to champion). However, to everyone’s delight, also on the cards is a return in August to the UK’s premium showcase of all things math and rock-influenced: The West Scarborough Pebble Tallying Championships. Followed shortly afterwards by ArcTanGent.

As the follow-up to Droids in 2014, one might look at Health‘s tracklist as some worrying divergence by the band into the realm of seriousness. While tracks ‘Nobody had the Heart to tell him he was on Fire’ and ‘Carpet Diem’ are effective chortle-inducing throwbacks to the days of ‘You eat Houmous, of course you Listen to Genesis’, ‘I Haven’t had a Lunch Break since Windows Vista came out’ and ‘Athlete’s Face’, there is much to indicate a more sombre nature adopted by the recently beard-aligned trio from Liverpool (Mostly. Step up your fuzz game, Greg).

The initial moments of opening track ‘Have you Ever Seen Milk?’ do little to quash the feeling of a denser gravity at work in Health, possibly aided by existential question posed by the title regarding the viability of the stuff that may or may not come from cow tits. Mull this over, if you will, during the first one and a half minutes of slow and simple guitar exposition using a sound so distant that it may well have been recorded from neighbouring Berkshire. Things perk up before long but melodies remain a little sparse and sporadic, lacking the sort of balls-to-the-wall force that you might expect from AMTP; the desired effect is easily replicated however by violently thrusting your balls into a wall.

What following track ‘Ballerina’ lacks in dairy-based thought provocation it makes up for in dark and full-bodied homophony from the outset, with Ben Griffiths and Tom Peters utilising the sort of co-operative comradery that can only come from two men with beards such as theirs. It’s an exhausting  track which features little reprieve from the nefarious vibe it sets out with and is sure to cause a few clouds in Clitheroe to turn black and take on the forms of unholy creatures from Serbian folklore during their set.

Earworms start burrowing by track four; ‘Nobody had the Heart to tell him he was on Fire’. The riff that explodes from the gate is a supremely catchy offering and shows Alpha Male Tea Party at their best; a viscous combination of two gooey guitar lines that give the listener a feeling not unlike that of sliding gracefully into a large tub of Petit Filous.

Into the meat of the album now and Health‘s qualities really begin to shine. ‘Powerful and Professional’ is an apt name for track 6 as its unassuming intro riff quickly morphs into one of the staples of this band; staccato, disjointed, euphoric guitar lain over a wholly approachable and deliciously uncomplicated beat. This really sets Alpha Male Tea Party apart from bands that cram too much inaccessible poly-stuffing into their math turkeys.

Much of the same for track 7, ‘Carpet Diem’, which features a riff so infectious that first time listeners at ArcTanGent will be crowding the medical tent on the lookout for entire packets of amoxicillin to swallow. There are some very tasty morsels of math ingenuity hidden within that emerge from between the ever-changing landscape of the song, while the myriad guitar sounds help create a fantastic array of moods with the kind of skill that Monobody regularly employ. This rolls over into track 8, ‘Some Soldiers’, which provides yet another song that AMTP could file under ‘anthems’ and one that is sure to get the hairy, gelatinous patrons of ArcTanGent wobbling en masse come August.

It will hopefully have become obvious by track 10 that none so far have featured vocals, which were a one-time feature on Droids that were scattered to the ether after the first track. Up until the final track of Health had they remained firmly at bay by the presence of vocal-stifling facial hair muffling 66% of the band’s inner cords. The capitulation of ‘No More’ contains a brief resolving of this vocal impasse to good effect and while AMTP have been known almost entirely for their pneumatic power-riffs delivered with Phillips-head precision, it does feel like a small yet engaging element to the band’s identity is getting lost in the mix.

To say Health is a rollercoaster would be a cliché and also a lie: it’s not a rollercoaster, it’s a music album. If Alpha Male Tea Party were trying to put out a rollercoaster, they’ve failed miserably, but if they were trying to put out an album, they’ve done a bang up job. Health starts out a little slower than it should but gathers enough pace in the middle to waltz over the finish line like an uncharacteristically conceited Usain Bolt. It’s a testament to a band whose simple and highly lucrative all-natural approach is rare in these days of cat wigs, two-person jumpers and plastic sheaths for your avocado halves. If Health were a juice, it would be the sort of no-additive, unadulterated super juice that can bestow on its consumer the kind of heavyweight mega-scrotum that I imagine Terry Crews has swinging between gargantuan thighs. It wouldn’t be too farfetched to assume this was the inspiration for the album name.