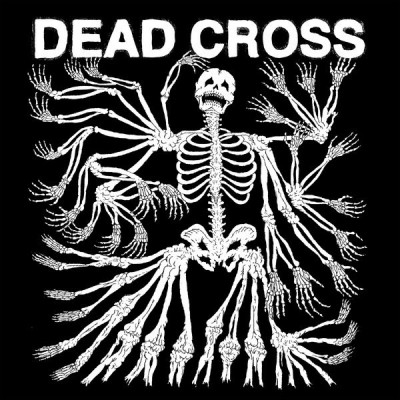 There’s something about the way that Mike Patton has worked over the years that it’s rare that anything he puts his voice to can be described as being a surprise, given his range and abundance of output. With that said, it means that whatever he decides to put his voice to ensures that the bar is set ridiculously high in terms of both fans of his own work and fans of whatever genre he’s going to be punching a hole through.

This time, it’s a quick journey through the realms of hardcore, joining up with Justin Pearson and Michael Crain and reuniting with drummer Dave Lombardo in joining Dead Cross – a band who arranged shows before a single song was written, who brought Mike in when original vocalist Gabe Serbian left, and who happily carry this formative chaos through their debut album because, frankly, this is the best way to go about this sort of thing anyway.

It’s pretty clear from the moment the sounds of a cut-off modem give way to the onslaught of ‘Seizure and Desist’ that there’s going to be pretty much nothing in the way of compromise happening throughout the ten tracks on offer here. Dave Lombardo is in his absolute element here, playing as fast and as hard as he’s ever done, and it’s testament to the rest of the band to not only keep up but to keep everything sounding as clear and sharp as it does throughout.

Patton is flexing his vocal cords here right across his bizarre and wonderful range here, and it’s this that sets Dead Cross apart from a genre that found its niche in the 1980s and hasn’t ventured out much since then – his screams and shouts are impressive enough, but it’s the sudden and frequent bursts of harmony that make this record feel that it has something new and exciting to offer. ‘Shilleagh’ for example runs the full repertoire, sometimes simultaneously but never uncomfortably.

The big surprise comes halfway through, when the listener is fully into the mayhem on offer.  A cover of Bauhaus’ ‘Bela Lugosi’s Dead’ slows the pace right down, the guitar and bass become murkier and Patton’s voice becomes something new altogether. It’s appearance could well be as a bit of a breather for band and audience, but this ur-Goth approach to the source material here is truly remarkable and will make a lot of people very happy indeed, as well as creating a longing for another album that sounds just like that, all the way through.

For a record where keeping under three minutes is largely the order of the day, ‘Gag Reflex’ comes as something of a game-changer near the end. Still keeping in with the rest of the album, it does feel like it would make a great Faith No More track, had Faith No More swapped the colour and beauty of their 1990s work for something altogether blacker and angrier.

Hardcore is a hard genre to inject new life into, as it’s been largely unchanged since its heyday (mostly because it’s never really needed to), and Patton and Lombardo helming this here may seem like a bit of a mid-life crisis on paper. The fact of the matter is writ large across this record though – the band have picked up all the best bits from everything they love from the scene (and others), turned it inside out, added new stuff and then forced it upon us as hard as they could. There are absolutely no complaints from me about that.