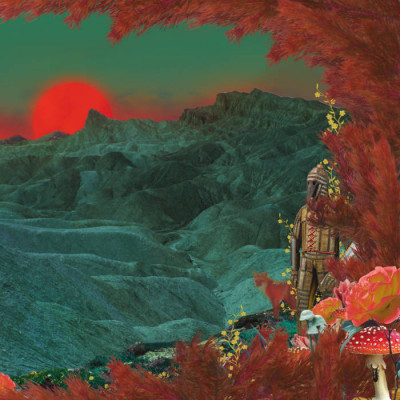 If split releases are to provide the listener with two sides of the same genre, then this Hawkeyes / Radiation Flowers release certainly hits the nail on the head. Taking two disparate bands from within a large psych genre, the space rock of Hawkeyes (the one from Ontario not the one from Leeds that our readers may be more familiar with) is placed next to the psychy shoegaze of Radiation Flowers. On paper it shouldn’t work, the reality is you get a beautiful combination of dark and light, intense and soft, structured and unstructured. The best thing is each of these themes is taken on by each band during the play through. Almost like they are batting against each other, the symbiosis created by the energy is intriguing.

The first two tracks belong to Hawkeyes whose deep rumble of space rock is nothing new and for the first few minutes of ‘Atomheart Motherfuckers Never Learn’ you could be forgiven for rolling your eyes at what seems like yet another instrumental space-rock band. Then, as if from nowhere, a slight change in chord structure and tempo reveals a rather hypnotic sound mixed in with the flash of garage rock. From the preamble of the beginning, opening out into an epic space fest. Hawkeyes make perfect use of time too by not dragging anything out for too long.

That ‘Creator Destroyer’ matches this for intensity whilst also sounding like a different band is something else. Much more succinct and heavier, it’s interlaced with neat melodic pointers before an ever increasing swirl of noise drowns out all in your mind. That is until an abrupt stop leaves you teetering on the edge of sanity.

You could almost forgive Radiation Flowers for not realising such heaviness but two albums down the line and this most exciting of bands provide a stunning second half. Providing three tracks of different flavours, all laced with their trademark wall of noise, they provide the light to the prior dark. They also delve deep into some heady places as the glistening guitars build. ‘Always On The Ground’ is the centrepiece track which acts as the standard for their music, but it’s the mysterious ’33 Floors Up’ which drags you in at first. As if in answer to the spacier concerns of Hawkeyes, they ramp it up to keep all intensity flowing. It’s a perfect marriage of what may seem like an odd couple.

The gloriously lysergic ‘Never Fade’ leads us out in all its majestic glory, making its case for Radiation Flowers to be one of the most exciting bands around at the moment. That they have worked so well against the sounds of Hawkeyes proved that the psych genre, for all its disparate weirdness, can often throw up the most wonderful surprises and conundrums. It shouldn’t work, instead it becomes one of the best releases this year. A stunning release which proves the psych genre still has much to offer.